We wanted to spend yearend away from City life but not at the crowded location. We both are doing regular cycling in the city so though came to mind like why not cycling along with a couple of offbeat locations. We planned 3 days trip to Konkan. we stayed at Roha which is our friend's hometown.
traveler for this trip was I and Wife Renuka.

About Roha and nearby places
Roha is the small city from Raigad district and starting station of Konkan Railway. It is located close to Mumbai Goa national highway. Roha is on the bank of Kundalika river which is a famous spot for river rafting near Pune/Mumbai.
Famous Konkan beaches like Alibag, Nagaon, Kashid, Murud, and Diveagar are close to Roha city. Roha can be a central location for trekkers as forts like Janjira, Revdanda, Korlai, Avachitgad, Ghosalgad, Birwadi fort are close to the city. Phansad Wildlife Sanctuary is few km away from Roha.
We decided to visit a couple of forts and offbeat beaches namely Adgaon and Velas Aagar.

To reach Roha, the route is Pune – Join Mulshi road from Chandani Chowk – Tamhini ghat – Kolad (Do not take a left turn of Nijampur MIDC area) – At Kolad, join highway and take left for Roha – Roha.

30 December 2017: Pune - Roha
Our original plan was to leave Pune on 29 Dec Friday but due to personal priority, we left on 30 December by 10 AM. Our cycling plan was to explore north side on day 1 and south side of Roha on day 2. We altered it and planned to do cycling until Diveagar. We chose the route via Tahmini – Kolad. Road condition in Tamhini was horrible. We had our lunch in Viraj hotel at Mulashi village. After 4 hours of journey, we reached Roha. Our friend's parents stay in Roha and we opt to stay at their place.
After having a coffee break, we left Roha for fort/beach visit. Our Next destination was Revdanda. After crossing the bridge on river Kundlika, we entered in Revdanda village. It is a small village famous for Beach and Revdanda beach fort.

Revdanda Fort was built in the year 1528 by Portuguese whereas prior to that, they built a factory in the year 1516. Later they built a wall for the factory and the construction of the fort. In July 1683, the Marathas attempted an attack on Revdanda. The Marathas besieged the fort but had to withdraw when the Portuguese attacked Fonda. In 1806, the British took over the charge of Revdanda. Angres family conquered the fort in 1817 but the British got the fort back in 1818.
This beautiful beach fort consists of strong fortification walls holding sea waves, Bastions, Cannon and 7 floored watch tower (Mainly known as Saatkhani i.e. 7 story tower). The circumference of the fort is around 5 km. The fortification wall surrounds the entire village. Most of the land inside the fort is the private property of villagers hence it became difficult to explore the entire fort. Near the watch tower, you can see 4-5 cannons. On the right side of the tower, you can see the grave of Portuguese queen. It has a symbol of Portuguese emperor which can be seen easily. After exploring fort area, we went to the beach.

We spent some time on the beach and then witnessed the beautiful sunset effect as Sunset was behind Korlai Fort. Watching the sun sinking into the sea at the horizon spreading a red tint all over the sky…. my favorite activity on the beach. After sunset, we had some snacks on the beach. Friend's Parents joined us and we had a good time. We came to Roha for dinner and had rest.

31 December 2017: Roha - Murud - Adgaon - Velas agar - Roha
We woke up by 5 AM and left Roha at 6 AM. As road condition to Murud via Kashid was not in good position hence we took the route as Roha - Tareghar - Tambadi - Gpalwat - Nagshet - Murud. We parked our car in Murud and took Cycle out of Cycle ride.
Our cycling tour route was Murud - Dighi vai ferry - Adgaon beach - Velas Agar beach - Murud via ferry. I'm used to for such terrain for cycling whereas Renu did most of the cycling around Pune city. The entire route was full of ups and downs which required good stamina and focus. In few km of cycling, we climbed small ghat. After the small climb, we took a small break to enjoy the view of Janjira fort view. we have been to Janjira fort a few years back so we decided to skip the fort. Rajapuri is the village from where you can visit fort via small sailboat ride. 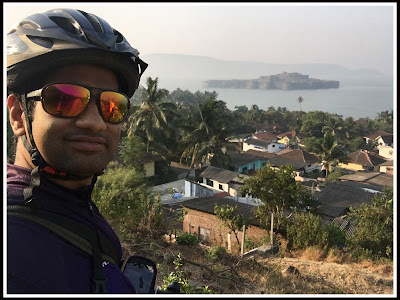 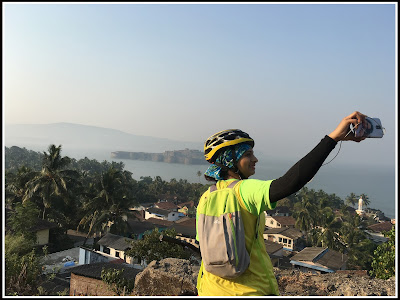 The fort was originally built in 15th century on a smaller scale by a local Maratha-Fisherman Chieftain- Ram Patil to protect his people from pirates/ thieves and was known as “Medhekot". Siddi commanders Pir Khan, who came with three ships armed with necessary weapons and soldiers and captured the fort. Pir Khan was succeeded by Burhan Khan, who demolished the original fort and built an impregnable much bigger, 22 acre, stone fort sometime in between 1567 and 1571. The fort was called 'JazeereMahroob Jazeera ' which in Arabic means an Island. Siddi was not won by any war but by breaking trust and offering liquor to Ram Patil. Latter on Siddi king forcefully converted Ram Patil to Islamic and when he opposed then he killed by Siddi. Latter many local Koli and Hindu’s was killed who opposed their establishment. Shivaji’s all attempts to capture Janjira fort failed due to one reason or the other.  When Sambhaji also failed, he built another island fort, known as Kansa or Padmadurg, just 9kms north of Janjira. You can see rocky bridge during low tide at Rajpuri which was an unsuccessful but great attempt by Sambhaji. The Janjira state came to an end after 1947.


The fortification was amazing and very strongly builds to protect against the enemy. Fort has 19 rounded bastions. Three story bastions were beautifully constructed. History says that there was 572 cannon to protect the fort. You can see India’s 3rd largest cannon named Kalal-Bangadi. Other highlights from the fort are 6 stories place (now only 3 floors are left), Balekila, Queen Lake, quarters, mosque etc.The main entrance of Janjira Fort is adorned with a stone carving, which illustrates six elephants trapped by a single tiger. This carving is believed to be a symbol of the bravery of the Siddi rulers.

We kept paddling till Agardanda. you can visit Khokari Tombs after Rajapuri. There are 3 stone Tombs (around 500 years old) belongs to the early ruler of Janjira. Largest Tomb is of Siddi Surul Khan who was chief of Janjira from 1707 to 1734. Other two smaller tombs are of Sidi Kasim, commonly known as Yakut Khan and his brother Khairiyat Khan who was in command of Janjira. Tombs are built in the Indo-Saracenic style and restored by the Archaeological Survey of India.


We put our cycles on the ferry and cross the creek. we were hungry and local suggested us to have Tasty Samosa / Vada pav at Dighi Jetty. I forgot the name of the person but he runs a small shop and sells only these 2 Items. It was freshly fried and tasty. We took a right tern for Adgaon. This route consists of two steep climb ghats. I was pretty much comfortable and Renu did a great job (in spite of less cycling experience) with a couple of pit stops. Sun was dominating the sky whereas cool breeze from sea line trying to make us feel fresh on cycle. The entire route is parallel to the coast. When we took a small break on the top of Ghat, few locals from nearby village gather around us. They offer us tea/coffee/snacks (Without expecting any money) when they got to know we are exploring a nearby area of Cycles. We faced few questions typically asked any long distance cyclist during tours like a geared cycle?how long you ride?Speed? tires are tubeless? is it costly etc? After a small break, we continued our journey and crossed the second Ghat as well.

we reached our first beach destination, Adgaon beach. It is a small curved beach. It is not popular in tourist hence quite clan and claim place. We took our cycles on the beach and spend more than an hour. On the north end, you can see some interesting rock cuts made by Sea waves during high tides. There is a small beach (which is part of Adgaon beach) besides Adgaon but it is mainly used to park fishing boats. We saw a family of Dolphins very close to sea shore which was an unexpected bonus.

We were hungry and ask locals for meal arrangements. We had a homemade meal which was average in taste. We left Adgaon for further journey. Our next destination was Velas Aagar (Do not confuse with Velas from Dapoli area). The road was flat and parallel to the coastal line. We reached Velas Aagar which was another less visited beach. Beach was clean with some rock formations on the beach. There is small creek at the end of the beach and you can see the famous Diveagar beach on the other side of Creek. We had a small break at the beach before starting the further journey.


Diveagar beach was heavily crowded (we spotted it from Velas Aagar) hence we decided to skip Diveagar and start return journey. For the return journey, we came from Diveagar-Dighi route which was quite flat as compare to Adgaon side road. We reached Dighi before 2.30 PM. 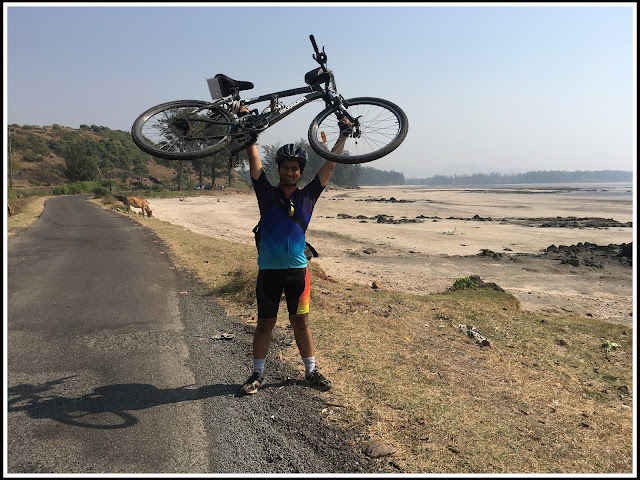 We got to know that ferry was shut down due to low tide and next ferry is at 5 PM. We settle down at jetty and after some time they arranged small ferry to transport few bikes and people. As we were on cycle, they got preference to board the small ferry. We crossed the creek and continued out cycling till Murud.
Before leaving in the morning, we requested Aana Gupte (we parked our car on his property with permission) for bath arrangement after cycle ride. After getting fresh, we spend time on the Murud beach which was quite crowded considering year-end evening.
We witness 2017s last Sunset from Murud beach. We mounted our cycles on the car rack and left for Roha. For the return journey, we choose Nandgaon - Kashid - Roha route. We visited Ganesh temple from Nandgaon which is known as Sidhi Vinayak Ganesh temple. This temple has been in existence since 1036 AD. Myth has it that panchang (Hindu Calendar) is blessed by this Ganesha.


We reached in Roha for dinner and welcomed the year 2018.

1st Jan 2018: Roha - Pali - Mahad - Pune
We woke up a bit late and spend some time in Roha near Kundalika river bank. We left Rohan by 10 AM. We choose Pali - Khopoli - expressway route as Tahmini route was in horrible condition. Considering new year day, we decided to take a quick stop at Pali and Mahad for Lord Ganapati Darshan.
Pali Ganapati temple is known by name as Ballaleshwar Ganapati. It is 8th Ganesh from Ashtavinayak (8 Ganapati temples) temples. We had Darshan and moved to next place. Our last destination from the trip was Mahad Ganapati temple. This is 7th Ganapati from Ashtavinayak and known by name Varadvinayak.

For the return journey, we preferred Khopoli – Expressway road and reached Pune safely by 5 PM.