We visited Mahabaleshwar multiple times but never able to visit Beautiful Pratapgad Fort. we planned a separate trip to Fort and went on Pratapgad. Fort holds a very important position in history due to the great battle of Pratapgad between Shivaji Maharaj and Afzal Khan won by Shivaji Maharaj.
Travellers for this trip were I and Renuka.

About Pratapgad Fort:
Pratapgad fort is located 20-22km from Mahabaleshwar. The Fort is 3540 ft above sea level. It was built 1656 by Moropant Trimbak Pingle who was a loyal Prime minister under King Shivaji. The main purpose of the fort in order to defend the banks of the Nira and the Koyna rivers, and to defend the Par pass.
Pune to Pratapgad is a 3 to 3.30 hours’ drive. Best way to reach Mahabaleshwar is Pune – National highway 4 – After 75 km journey on NH4 Take right at Surul – Wai – Panchgani – Mahabaleshwar - Pratapgad. There are many signboards which guide you to Mahabaleshwar and at all tourist points.

18 December 2017: Pune - Pratapgad - Pune
We left Pune by 7 AM. Without taking any pit stop, we reached Pratapgad fort base by 10 AM. NH-4 highway is now extended up to 6 lanes highway. Apart from few patches between Wai Phata and Wai, rest of road is in good condition.
Limited car parking is available at the base. The Road on the left side of parking goes to the steps of the Fort. After climbing few steps, we reached Mahadarwaja (Main Entrance) which is built between two bastions. There are 2 small rooms which were used by guards. One of the Guardroom has Cannon.


Take right side route after crossing Mahadarwaja for Tehani Buruj (Watchtower). This is the famous bastions which always shown in Pratapgad fort's photo. It was used to keep a close watch on the nearby valley. Watchtower offers you a beautiful breathtaking valley view. You can see Fort view from this bastion as bastion lies on the lower part of the fort. After spending some time on Bastion, we returned towards entrance gate. There are steps which take you to the upper part of the Fort. You can see the Lake on your right side while climbing the steps. This Lake is known as Rahat Lake. There are total 4 lakes on the fort.

We went to the top of fort first where Status of Shivaji Maharaj is mounted on the horse with a sword in his right hand. Status was unveiled by late Jawaharlal Nehru (Prime mister). As per locals, this place was used to be a palace of Shivaji Maharaj. This point is a topmost point fort also known as Bale Killa.
We settle down here and had a good discussion on the fort history. Whenever we visit any fort, we love to read/discuss on the fort and about its history. It gives you different perception to explore the fort. This was the Hill known as "Bhorpya" which was used as a watchtower. Shivaji Maharaj captured the place and ordered to construct the fort. Fort was built under Shivaji Maharaja's Prime minster 'Moropant Pingle'. During Maratha emperor, Prime minister was recognized as Peshwa. Fort came into limelight due to Battle between Maharaj and Afzal Khan.
Afzal Khan was strongest and powerful warrior from Adilshah emperor. He was ordered to capture or kill Shivaji Maharaj by Adilshah Sultan. He came along with 20000 cavalries, more than 15000 infantry, 1500 gun army, 15000 Khan's personal army, 100+ elephant base army, 1000+ camel base army and 150+ canons for battle (Count varies in different books). Shivaji Maharaj was in Pune at that time and he knew that defeating around Pune not possible hence he moved to Pratapgad. Considering Pratapgad and nearby hill terrain, Afzal's most of the army was useless in battle. He settles down in Wai as he was aware of wai area.
Shivaji offered meeting at the base of Pratapgad which was agreed by Afzal Khan. He agreed with one condition that meeting will take place with few armed bodyguards and leader without any weapons. The meeting was scheduled for 10 November 1659. Afzal Khan joins the meeting place with Katyar (Small sword) hidden under a cloth. Shivaji Maharaj was aware the intention of Khan and he wears protective armor under clothes. Also, Shivaji Maharaj carried weapon Vagh Nakh (Weapon looks like Tiger claws made up of sharp iron) for self-defense.
During the meeting, Afzal gave tight hug to Maharaj and struck him with a small sword. Shivaji Maharaj was saved by armor. As counter attach, Maharaj attack Khan with Wagh Nakh. Injured Khan ran out of Tent (Meeting place) for help. Sayyad Banda (Khan's bodyguard) attacked Shivaji Maharaj but Jiva Mahala (Shivaji's Bodyguard) intervened and chopped Sayyad Banda's hand by the sword. This event remembered in Marathi as "Hota Jiva Mhanun vachala Shiva" which means because of Jiva, Shiva lived.


Afzal Khan went in Palkhi (non-wheel Vehicle to carry leader) but Palkhi lifters were attached by Shivaji's bodyguard Sambhaji Kavji. He killed Afzal Khan. After war, Shivaji Maharaj sent Afzal Khan's head to Rajgad to show it to Jijabai (Shivaji Maharaj's mother) as Shahaji Raje (Father of Shivaji Maharaj) was captive of Afzal Khan and Afzal played the main role to kill Sambhaji (Elder son of Shahaji Raje, Do not confuse with Sambhaji Maharaj as he was son of Shivaji Maharaj. Same name was used in multiple generations)
After Afzal's death, Shivaji Maharaj gave a sign (By lighting cannons) to attack Afzal's army. quick action by Shivaji's army and without Afzal Khan, his army fail to fight. Adilshah lost too many armies (more than 13000) which was a major set back to his emperor. Shivaji Maharaj won many weapons, cannons, horse, elephant, camel, stored gains, and money. All captured war of prisoners were sent back to Bijapur with proper respect. This remarkable victory made Shivaji Maharaj hero in the emperor and famous as great mind warrior within India at that time. Shivaji also buried Afzal Khan as per Islamic customs and built his tomb near Pratapgarh, as per his philosophy of ‘once the enemy is dead, the enmity is dead too’.
We left the Status to explore remaining part of the Fort. We visited Keshawraj temple which is located on Bale Killa. There is small place opposite to temple which is known as Sadar. A place built for important meeting and discussions.
After Climbing down, we visited Bhavani Temple. Idol was curved from the rock which was brought from the convergence point of three rivers namely; Trishul Gandaki, Shwet Gandaki, and Saraswati. Temple also have Shivpindi made up of transparent crystal stone. you can see small cannons from Maratha emperor kept in temple campus. There is a sword of the warrior Hambirrao Mohite, over which his name is engraved along with a sign of ‘6 Star’. (One Star was awarded to a person who kills 100 enemy soldiers).

There is Hastakala Kendra shop for handicraft product. View of Tehani Buruj (Watchtower bastion) is beautiful. After a quick visit to the shop, we took a lunch break at hotel Rasoi. It is opposite side of Bhavani temple entrance. You can have a tasty Maharashtrian meal here along with the fort view.

We left beautiful fort after lunch. At the base of the fort, you can see Tomb of Afzal Khan and his faithful bodyguard, Sayyed Banda. Due to some political issue, entry to visit this place is banned. There are Hastakala Kendra handicraft shop and miniature village which takes you into Maratha emperor era. 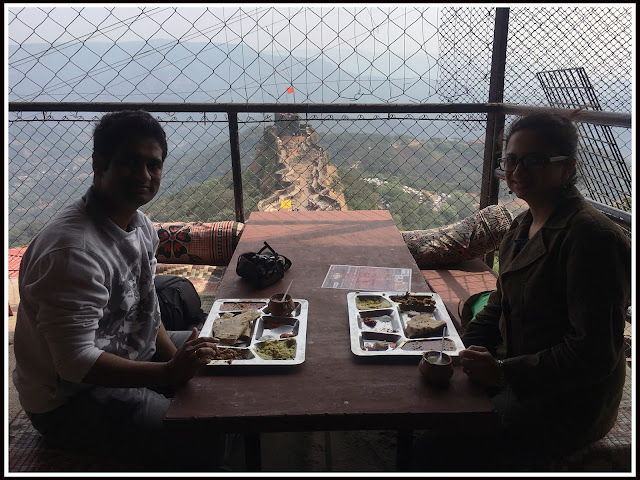 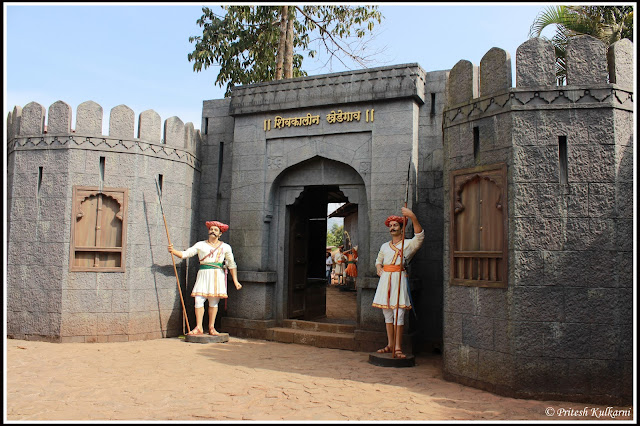 We visited Mahabaleshwar market for some quick shopping and then tasty Strawberry with cream as dessert in Bagicha ice cream parlor. As we wanted to spend our evening time at table land, we proceed to Panchgani for Tableland. It is 2nd longest mountain plateau in Asia.We were least interested in riding so we had a nice walk on tableland. We spend sunset time together on tableland and then left Panchgani.


Expenses:
We reached home safely by via same NH-4 route by 8.30 PM
I will try to upload more and more travel blogs. Thanks for reading this Travel Blog.