We were looking for a quick weekend trip in Konkan and decided to visit Akshi beach. Khanderi fort was in places to visit list hence we plan a half-day visit to Fort as well.

Travellers for this trip were I and Wife Renuka.


About Akshi and Kihim
Akshi Village is a small village near Alibag. It is famous for flat bed beach and bird watching in the winter season.
Kihim is around 12km from Alibag towards North and famous for Beach and Watersports.

14 April 2018: Pune to Akshi
We woke by 5-5:30 and left home at 6-6:30 AM. We took Expressway route and had quick breakfast and coffee on Expressway food mall. We took Khopoli exit and took the road to Akshi. Road from Pen village to Alibag exit (Mumbai-Goa Highway) was in bad condition due to highway expansion work is in full swing. We reached at Akshi by 10-11 AM. As we haven’t done any stay arrangement, we saw few hotels and got a room at Kulpe farms. Kulpe farms are homestay budget hotel. They have AC/non AC rooms and cottages as well. Property is huge with all required activities and direct access to the beach. We did check in and went for walk.
You can see the Stone Sculptural at the entrance of Akshi village, near Shankar Temple. The Gadhegal is sculptural which is essentially a large, flat rectangular stone plate with symbols and Devanagari script upon it. It is three part stone slab in which the top part shows the Sun and Moon with or without a Kalasha. The middle part consists of an edict (Announcement/Law etc.) and last part shows a donkey in sexual congress with a men/Woman. Stone name Gadhegal derived from last part as Gadhegal means Donkey and gal means Stone. The sun and moon symbolise infinity, the kalasha indicates prosperity. As per archaeology study, anyone who dares to violate the royal verdict (Which is mainly mentioned in middle part of stone) is being threatened with the most disgusting of punishments. This stones are 1000 years old and can be found in Maharashtra, Gujarat and Goa.


We had our Lunch at Kulpe farms. The meal was tasty but it was too oily for me. After the chicken meal and began Masala, we stayed in the room to beat peak summer. By 5 PM we went to the beach for a walk and witness the sunset.


Sea-shore behind cultivations is about 2-3 kilometres long. Akshi beach is extended part of Nagaon beach but less crowded as compared to Nagaon. There are no Watersports available but you can take a walk towards Nagaon beach for Watersports activities. Even though sea colour is brown but it is very safe to enjoy the waves. The beach slope was gentle and you can take KM walk towards the sea. Sunset from the beach was awesome. Orange colour spreading all over the horizon during sunset was amazing.


We had a walk on the northern side of the beach. This area is mainly used by local fishermen to anchor the boats. You can see Alibag beach on the other side of Creek and Kulaba Fort in the sea. We witnessed beautiful sunset and captured the moments.


15th April 2018: Akshi - Khanderi Fort - Kihim Beach - Pune
I woke up before 6 AM and went to the beach for Run/Walk. We left for Khanderi fort visit by 7:30 AM. There is regular boat service available from Thal village. Boats can be arranged from Alibag or Kihim as well at a high cost as no regular service is available. Thal Village is fisherman colony and biggest market of Dry fish items. Be prepared for the stinky smell. If you cannot Bare the smell, better to skip it. Give a call to below Number (mentioned in contact detail section) for boat timing as boat time may vary as per sea Tides.

Khanderi fort is built on an Island which is known as Kanhoji Angre Island. Island was renamed in 1998 in honour of the Maratha general Kanhoji Angre. Shivaji Maharaj selected this Island for fortification to keep a close eye on British trade route and Siddhi from Janjira Fort. Underi Fort was built by Siddi on sister Island. There were series of battle happened between Maratha and Siddi (few battles were allied with British to beat Maratha) and finally Underi was taken over by Siddi. Underi was renamed as Jaidurg. No boat service is available to visit Underi but you can hire a private boat (chargers are as per fisherman’s demand)


When Maratha began construction of the fort in the year 1660, British naval tried their level best to stop the work by warning and attacks. Maratha warrior Mayank Bhandari with 150 men began work during low tide and in Monsoon with small vessels. Britisher fails to stop the work as their large vessels unable to approach to Fort. Fort was built in the year 1679. After many battles, it went into hands of the British in 1818.


Once you landed on the Khanderi fort, start your visit from the Right side of Jetty. You can see Temple of Vetal where huge stone painted in Shendur (red colour) is worshipped as Vetala. Local says that Stone grows in size every year. You can see Shark bone inside Temple which is used to donate to God Vetala.


There are series of Bastions on the fort and couple of Bastion have canons. You can see canons with cartwheel as well. It Feels sad when you noticed name written on wall and canons. Lighthouse was built in 1867 by Britisher on the fort. You can take a walk along the fort wall or take a half round and then climb stairs to Lighthouse.


You can see the metallic rock on the left side of stairs (Stairs from Jetty side and not from the back side of Fort) to Lighthouse. When you struck then large size rock with another stone, it creates metallic noise which is unique.


There is no Food stall available so better to carry water and some snacks. Please do not leave your plastic/Food waste on the fort and keep historical places free from garbage. We returned to Akshi after Khanderi fort Visit.


We check out from Hotel by 1 PM and went to Sanman restaurant for tasty seafood. Our next destination was Karmarkar Museum at Sasawane. It is sculpture museum of famous sculptor Padmashri V P Karmarkar. A museum has been set up at his house which is a 100-year-old house. His daughter-in-law (Sunanda Karmarkar) is taking care of this Museum. During childhood of Vinayak Karmarkar, he made a picture of Chhatrapati Shivaji Maharaj on the wall of Rama temple. British Collector (Otto Rothfield) saw the painting and offer education to him in J J art college in Mumbai. After acquiring the first rank, he worked in Kolkata and then went to England for further study. Sculpture of Horse ridden statues of Shivaji Maharaja made him famous across India. It was installed in Pune city at Shivajinagar. He created many sculptures which were installed in the varies part of India. You can view beautiful statue made between 1914 till 1964.

After our visit to a museum, we went to Kihim beach for sunset. Kihim Beach is around 10-11km from Alibag. Sandy Beach has a group of rocks on the seabed. Be careful while entering into a sea for swimming. Watersports, snacks stall on the beach is available. We witness Sunset from the beach and left Kihim for home.

We returned Pune via Pen - Expressway way and reached home safely by 11 PM. 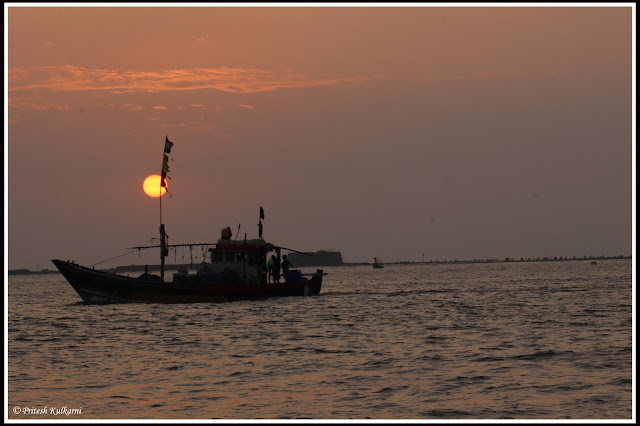