We had a long break in the year 2019 due to some personal reasons and unable to plan any trips. I read one quote on the Internet “More you travel, more you learn”. It’s was difficult for us to stop learning hence we decided to visit a few places from Pune. Being local, we had visited the place long back but it always good to visit again.

This short Blog is about Shaniwar Wada, historical fort of Pune, which was center of Maratha Empire and seat of Peshwas.

Location of Shaniwar Wada:
Shaniwar Wada is located on the bank of Mula-Mutha River. It is center location of Pune city and area known as Shaniwar Peth.

About Shaniwar Wada:
Shaniwar Wada was the capital of Peshwas of Maratha Empire. It was built by Peshwa Baji Rao I and ceremonial foundation was took place on 10 January 1730. Shaniwar Wada completed on 22 January 1732, Saturday at the cost of 16,110/- which was the huge amount at that time. As per the Local stories, plan was to build seven storied capital building made up of Stones but permission was denied from emperor. It is to be said that No one can built the stone complex greater/larger than King’s palace. Hence, only first floor was buildup of Stones and rest floors were built by Wooden.

Shaniwar Wada was home and work place of Peshwas such as Baji Rao I, Bhau Saheb, Ragunath Rao, Vishwas Rao, Madhav Rao, Narayan Rao, Sawai Madhav Rao etc. Even after completion of Shaniwar Wada, Peshwas made serval changes in Wada as per their requirement. Nanasaheb Peshwa made arrangement of water, which was carried from Katraj Lake (7.5km away) to Shaniwar Wada via underground channels.

Shaniwar Wada has five entrance Gates. The main entrance Gate is known as Delhi Darwaja (Gate). Peshwas Aim was to capture Delhi throne and expand Maratha Empire hence Gate, which was facing north named as Delhi Gate. Baji Rao Peshwa fulfilled this dream. It is also current entrance for Shaniwar Wada. This Gate is Large enough to enter Elephants whereas to stop enemy’s elephants, each door has 72 long steel spikes in 9x8-grid pattern. Two solid bastions are built with arrow loops and holes to attack on approaching enemy’s army. You can see Ganesh painting after entering from Shaniwar Wada. Apart from Delhi Entrance, there are four more entrance for Shaniwar Wada. They are Mastani Darwaja (Gate) or Aliibahadur Darwaja, Khidki (Window) Darwaja (Gate), Ganesh Darwaja and Jambhul Darwaja or Narayan Darwaja.

Mastani Gate named as Mastani (Baji Rao’s second Wife) use to travel outside Shaniwar Wada. This entrance was also use by Shamsher bahadur (Son) and Aliibahadur (Grandson). This is the smallest entrance of Shaniwar Wada.
Khidki (Window) Darwaja also known as Dindi Darwaja. Small Window on the Door gives this name to it. Ganesh Darwaja named due to Ganesh temple facing the entrance. Narayan Darwaja named as body of Narayan Peshwa was took out of Wada from this Gate. This Entrance also known as Jambhul entrance.

There is large hall above Delhi Gate of Shaniwar Wada. You can view entire Shaniwar Wada from the hall. You can take a walk on the top of Wall from this point. Entire wall with Bastions are in good conditions. Shaniwar Wada consists of important building such as palace of Peshwa, Diwankhana, Dance hall, Arasa (Mirror) Mahal, Ganesh Mahal, Mastani Mahal, Garden etc. Wada was seven-floored high and last floor was allocated to Peshwa. Arasa Mahal was built for Sawai Madhavrao. There was Ganesh temple inside Ganesh Mahal hence it is named as Ganesh Mahal. Narayan Rao was in Ganesh Mahal when Guards were about to kill him. It is to be said that palace walls were fill of paintings from Ramayana and Mahabharata. Another important feature of Wada is Hazari Karanje (Fountain of a thousand jets). This was built for entertainment of Sawai Madhav Rao when he was young. Fountain shape is of Lotus with 16 petals.

The most interesting story associated with Shaniwar Wada is that of the horrible murder of Peshwa Narayan Rao. Narayan Rao became Peshwa upon the death of his elder brother Madhavrao. Since Narayan Rao was only 17, his uncle Raghunathrao acted as his regent. However, the relationship between the two deteriorated rapidly and Narayan Rao placed Raghunathrao and his wife Anandibai under house arrest. Upset with Narayan Rao becoming Peshwa, Raghunathrao decided to use the disaffected Gardi guards to unseat him. According to legend, Raghunathrao sent a message to the captain of the Gardis, Sumer Singh Gardi, saying “Narayanrao na dhara”, meaning “catch Narayan Rao”. Anandibai intercepted the letter before it reached Sumer Singh, and made a simple but deadly change to the message. She changed the “dh” to “maa”. The message now read “Narayan Rao na maara”, or “kill Narayan Rao”. When the Gardis entered Shaniwar Wada to attack Narayan Rao, the panicked boy ran towards his uncle’s quarters screaming “Kaka mala vachwa” (Uncle save me!) but Raghunathrao did nothing, and Narayan Rao was hacked to pieces. So brutal was the attack that Narayanrao’s body had to be carried out of Shaniwar Wada in a pot and quickly cremated. Raghunathrao did become Peshwa after Narayan Rao’s murder, but could not remain on the throne for long. At the time of Narayan Rao’s murder, his wife Gangabai was pregnant. The courtiers and knights of the Empire deposed Raghunathrao and placed on the throne the Gangabai new born son, Sawai Madhavrao.

Entry Ticket:
Entry ticket for Indian: INR 25/-
Entry ticket for non-Indian: INR 300/-
No chargers for Photography whereas separate chargers/permission required for videography.
Light and sound Show at 07:30PM (In Marathi) and 08:30PM (In Hindi) [Ticket counter Opens at 7PM] 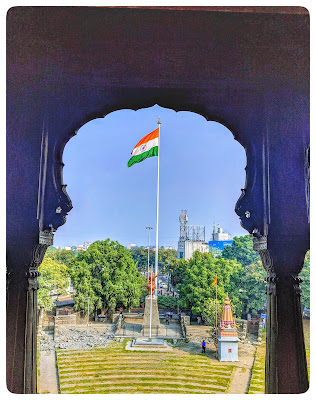 We had a long break in the year 2019 due to some personal reasons and unable to plan any trips. I read one quote on the Internet that More you travel, More you learn. It’s was difficult for us to stop learning hence we decided to visit a few places from Pune. Being local, we had visited the place long back but it always good to visit again.

This short Blog is about Shinde Chhatri, a memorial to Military leader Mahadji Shinde from Maratha Empire under the Peshwas.

Shinde Chhatri:
Shinde Chhatri is memorial to Military leader Mahadji Shinde from Maratha Empire under the Peshwas. He born on 3 December 1730 and he died on 12 February 1794 at age of 64. This memorial complex also had Shiva temple whereas Mahadji Shinde’s last rites were performed in the complex. In the year 1965, Samadhi was constructed outside Shiva Temple in the memory of Mahadji Shinde.

Mahadji Shinde was appointed in North India post-Third battle of Panipat. He recovered the loss post third battle of Panipat and became one of three pillars of Maratha Resurrection. He was the important leader during the First Anglo Maratha war between British and Maratha. British failed to win the war and forced to settle in the treaty of Salbai in 1782. He was a mediator between Peshwa and British. He also won Jodhpur and Jaipur through the battle of Patan and Merta. He helped Jats of Mathura during 1772-73 to destroy the power of Pashtun from Najibabad. His achievements over south were his victory over Nizam of Hyderabad and peace with Tipu Sultan of Mysore. He brought Maratha Glory over north post-Panipat war.


Mahadji Shinde died at Wanavdi near Pune on 12 February 1794. He described as Regent of Mughal affair and also Mughal gave him the title as Head of the Amir’s (Amir-IL-Umara).
Coming back from History, the architecture of Shinde Chhatri is a combination of Anglo-Rajasthani style of construction. Temple’s structure is made up of Black stone. The chhatri Hall is a two-story building with beautiful carving and design on it. Windows panels are multi Color stained Glass which looks beautiful and allows light to fall inside in attractive hues. You can see a beautiful Rajasthani pattern over window panels. Interiors view of Shinde Chhatri is mind-blowing. Painting and carving on Pillars, ceiling are just amazing. You can see photographs/paintings of Shinde Dynasty on the Pillars. There is a spiral staircase to go in the roof which has a European touch.


Shiva temple is just behind Shinde chhatri (Hall). Carved design is must watch at the base corner of Temple. The complex is also consist of the temple of Lord Vittala. Best time to visit the place is morning.
Shinde Chhatri (Umbrella) consider as is a sign of respect to great warrior hence you need to close umbrellas inside the complex even if it’s a sunny day or Raining.
To view the entire complex in detail, you need 1-1.5 hours. 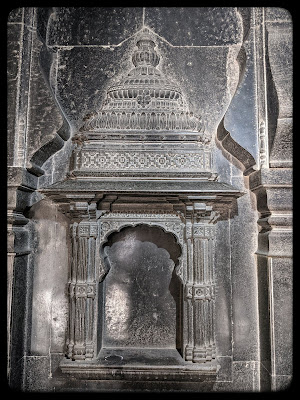