This was our (Me and Renuka) third visit to Dudhsagar. Nature beauty, gigantic fall and stay under open sky tempt me to plan this trek again in this year. This time, the tickets were booked 2 months in advance and we were again able to witness gigantic and beautiful waterfall. I asked few close friends for this trek and our group formed. It was consists of Me, Renuka (My wife), Himanshu - Ketaki, Abhijit – Manasi, Sangram – Priyanka, Adwait – Amruta and Sneha. I was very excited to catch the action for 2 days. We left Pune on Saturday by early morning train and came back on Monday early morning.

Those who have gone through my last year blog, they might find almost same description with some changes and with new photos.


About Dudhsagar falls:
Dudhsagar Falls (English translation: Sea of Milk) is a tiered waterfallwhich forms a part of River Mandovi in the state of Goa, India, on Goa's border with the state of Karnataka. It is lies high up in the Mandovi River's watershed and during the monsoon season the falls are transformed into one of the most powerful falls in India.It is a four tiered waterfall with a total height of 310 meters (1017 feet) and an average width of 30 meters (100 feet) and is 5th tallest waterfall in India.

Our Itinerary of the trek was:
Saturday:
Pondicherry expressestrain from Pune at 1:10 AM
Reach Londa Junction by 10:30 AM
Catch next train and reach Castle Rock station by 12:15.
14 km Trek to Dudhsagar waterfall and stay nearby waterfall.

Our journey began on 9th August 2014. We all met on Pune railway station at 12.00 AM near Comesum Restaurant. The train was scheduled to leave the Pune by 1:10 AM. After our bag arrangement, we slept soon. We had some snacks and tea/coffee in the train and spent our morning chatting with each other. Finally we reach Londa Junction at 10:30 AM. We waited for around 30-40 minutes on Londa station and then boarded the train to Castle Rock. Journey time was 45 min and we reached at our starting point by 12:00 PM.

Our trek begins at 12.30 PM. The Braganza ghat rail track starts from Castle Rock. The milestones were properly marked all along the route. The Castle Rock station was marked at 25/000. Within few minutes we were walking on the tracks surrounded by dense forests. We cameacross first train on the track after some time.There was sufficient space to stand. It was a magical experience with the headlamps of the train piercing through the mist filled surrounding as if a fire demon breathing fire. It took us a while to get used to walking on the planks especially since you have to take short steps all the while avoiding gravel. After some time your foot starts striking to strike the right rhythm and your eyes wander.

Soon enough our first tunnel came into horizon. It was around 200 m long and we had fun crossing it. I had done this trek last year so I was quite confident enough while crossing. Fortunately we didn’t come across any train when inside all 13 tunnels till waterfall. Till waterfall you have to cross 11 tunnels and 2 tunnels if you wish to view whole waterfall view. Hiking along the tracks is not easy as it seems. One cannot continuously walk besides the track for long time; you have to switch between sides of the tracks to in between tracks many times. The route was covered with thick mist even in afternoon time. Heavy rain was playing hide and seek game.

The longest tunnel which we crossed was 491 meter (or may be 419 meter. Little bit confused about distance). The rail track went through dense forest, with awe-striking views of mountains and valleys. Mist and clouds hovered all over creating breath-taking views. After 5 km of walking, just before 1 tunnel, we crossed over into the state of Goa. “Welcome to Goa” board welcomes us in a Goa state.
After atotal 7 km walk, we reached at the Caranzol railway station. From here it’s another 7 km walk to reach at Dudhsagar station.

As there were many small groups with us and we wanted to catch the shelter soon. Me and Renuka decided to move ahead and set up our bedding before other group reach. We reached Dudhsagar station before 5 and occupied the shelter. We were unable to enjoy the second half of trek but got shelter which was more important. Other friends came by 6. Till the time, we both quickly cleaned this place and we made popcorn and then Maggi on coal. We were carrying coal and lot of dry newspapers. Me and Renuka started burning coal with the help of newspaper and Kapur (used in prayer for Hindu god and very quickly it burns). We arranged stones to form a stove and our special Maggi program began. We were very hungry and desperately waiting for Maggi. Everybody was contributing for Maggi and after 20-25 minutes we were ready to eat Maggi. 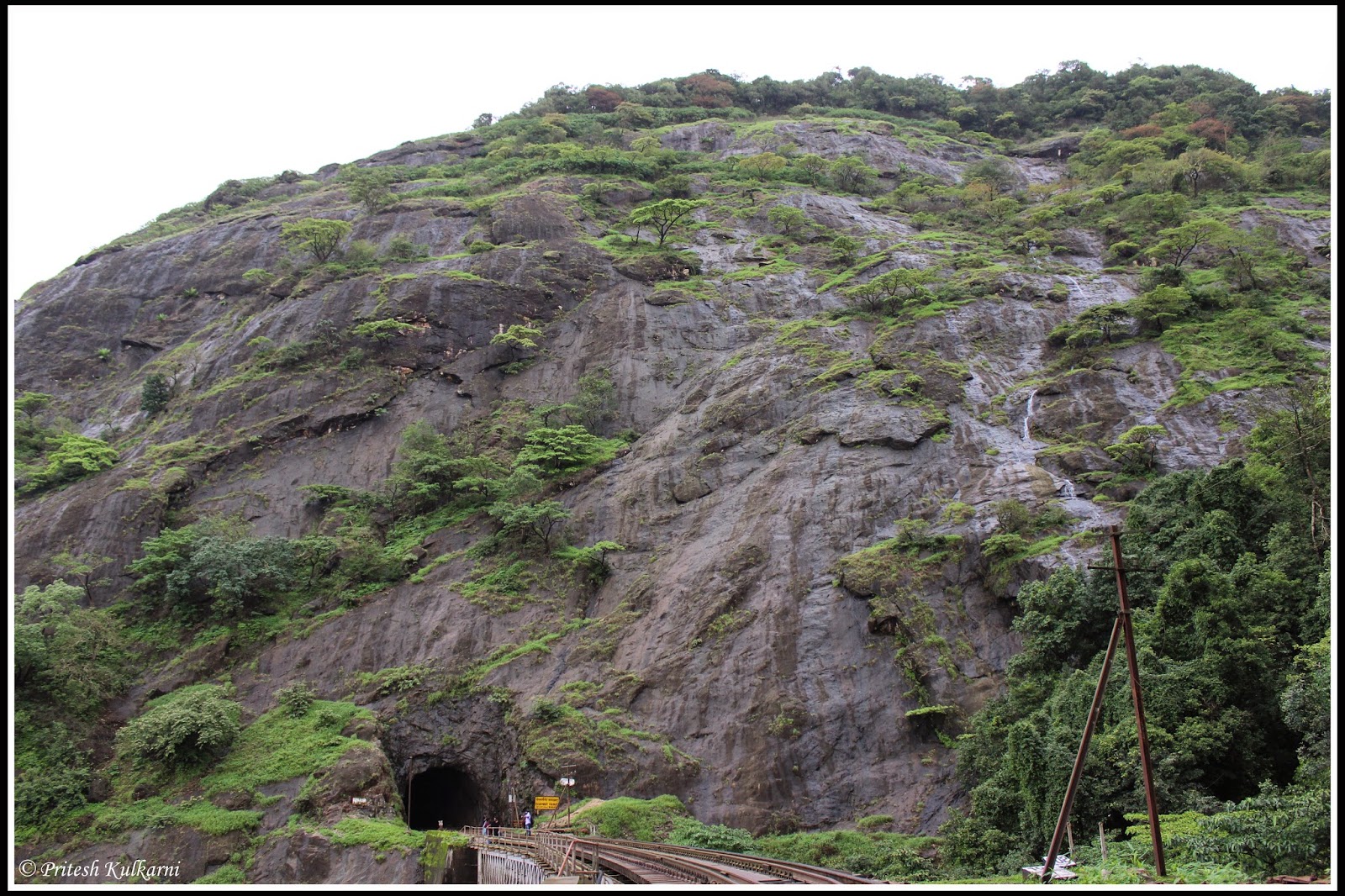 A pitch dark night, our church surrounded by forest and small water stream with cold weather and we were with our special coal Maggi. It is very difficult to explain this experience in the words. After lovely dinner, we had coffee. Now It was time to sleep. We took out our sleeping bags and set our beds. It was 11:00 PM in clock and all were excited to visit waterfall in early morning. We were aware that will not get sound sleep as railway line was few feet away from us and this route is quote busy with the goods train.

10th August, 2014: Dudhsagar railway station – Dudhsagar waterfall – Pune
Goods trains were crossing till3:00AM and after that me and Renuka were able to sleep properly. We woke up by 6 AM. After getting fresh from all activities in the nature, we had breakfast and then we were ready for our main purpose. The distance between Dudhsagar railway station and waterfall is nearly 1 km. You need to cross tunnel number 11. We all were excited to go there. We took lot of photographs and went into the tunnel No 11. The very first thing we noticed when coming out of tunnel 11 is the roaring sound of water falls on the backdrop of a huge rocky mountain. Dudhsagar falls is a gigantic waterfall, roaring and thundering as water fell on the rocks. We just kept watching the beauty. Now we were in front of huge, white, roaring waterfall throwing enormous blanket of mist all over the railway bridge and into the air. We took a lot of photographs from the bridge. It was a little bit difficult tasks to capture entire waterfall in 1 frame. The force of water was too much for a human being to go near it. So, we admired the beauty of the waterfalls by standing on the track. We were aware that after 10 AM, this place becomes crowded as 2 trains took halt at station and lot of tourist come to visit. We captured many photos and decided to go further to view the entire waterfall, let’s say waterfall viewpoint.

To reach to the waterfall viewpoint, you need to walk 2km from Dudhsagar Waterfall Bridge towards Kulem. On the way to this view point we came across 2 back to back tunnels. Tunnel No 12 and 13 are just few meters apart from each other having a gap between them where a small water stream falls and sunlight lightens the spot. 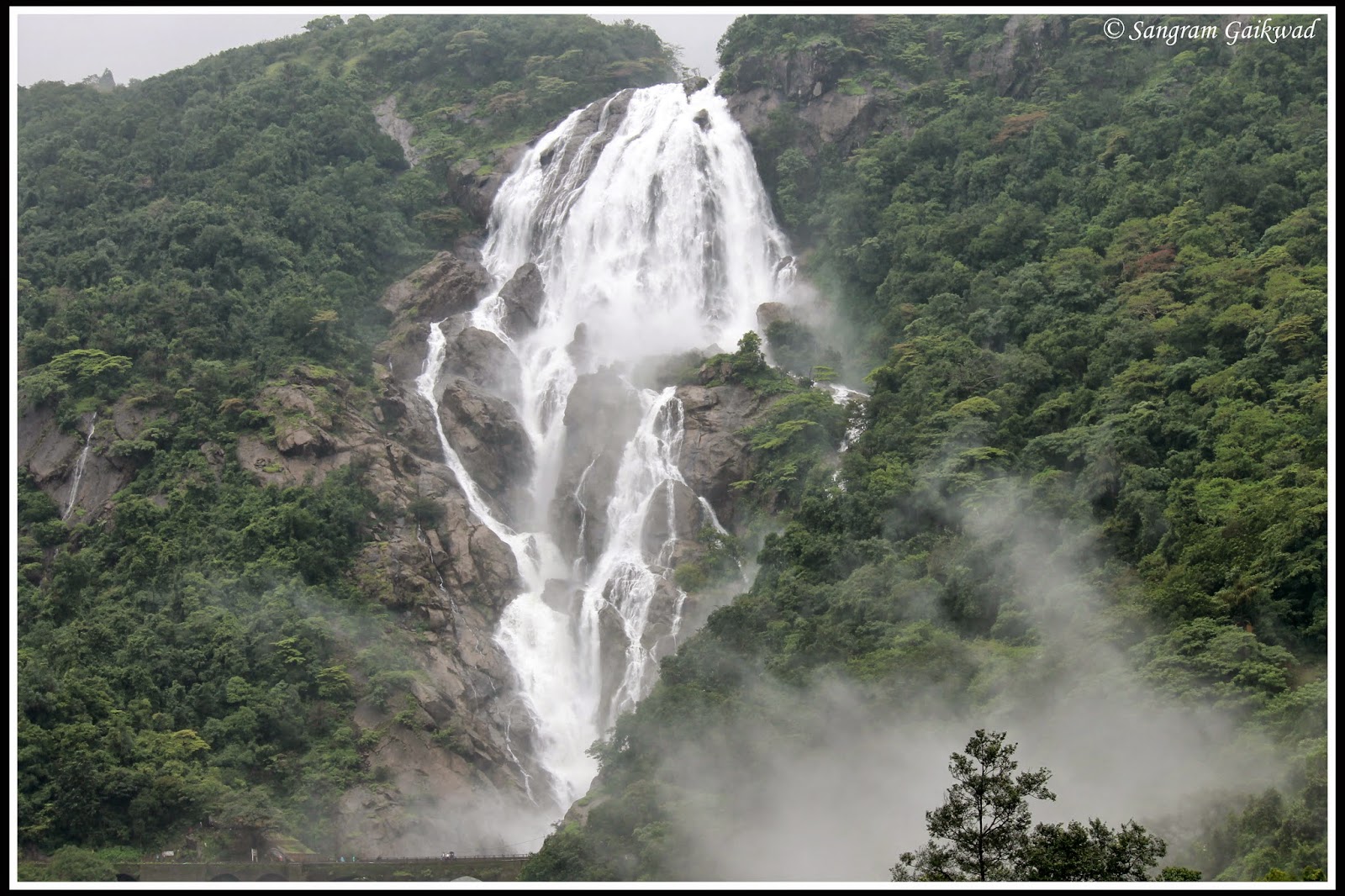 After 2 km walk, we reach to waterfall viewpoint. Dudhsagar waterfall view from this point is simply amazing and I don’t have words to explain this nature’s beauty. From this point also, we were able to hear roaring sound of waterfall. I clicked as many photographs as I could, with different angles, every member’s solo photographs and many more. We spent around an hour in the nature and witness the beauty of nature. We got to know that a passenger express is going to cross the Dudhsagar Bridge. I didn’t want to miss the famous photograph of Train crossing waterfall. 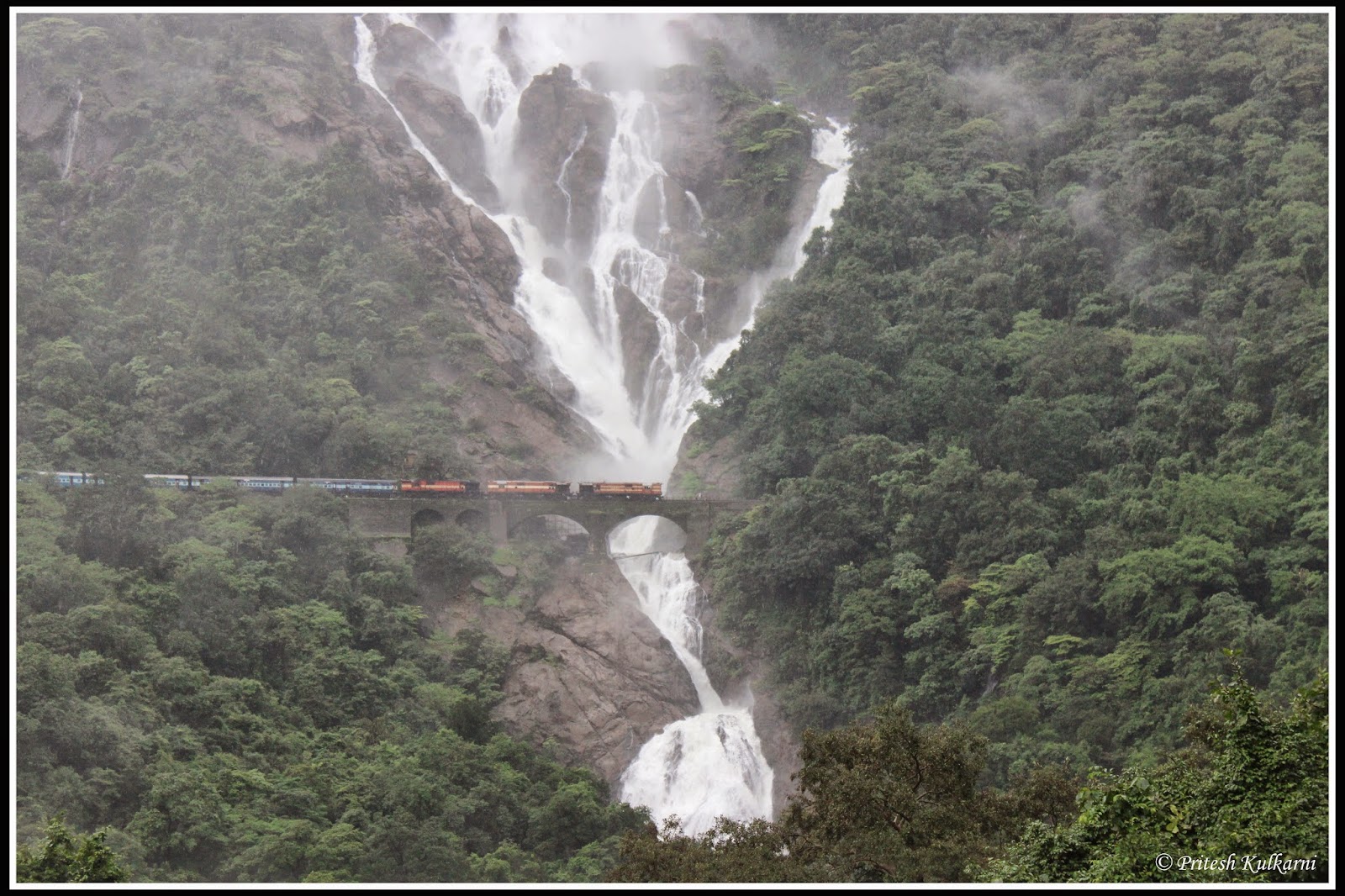 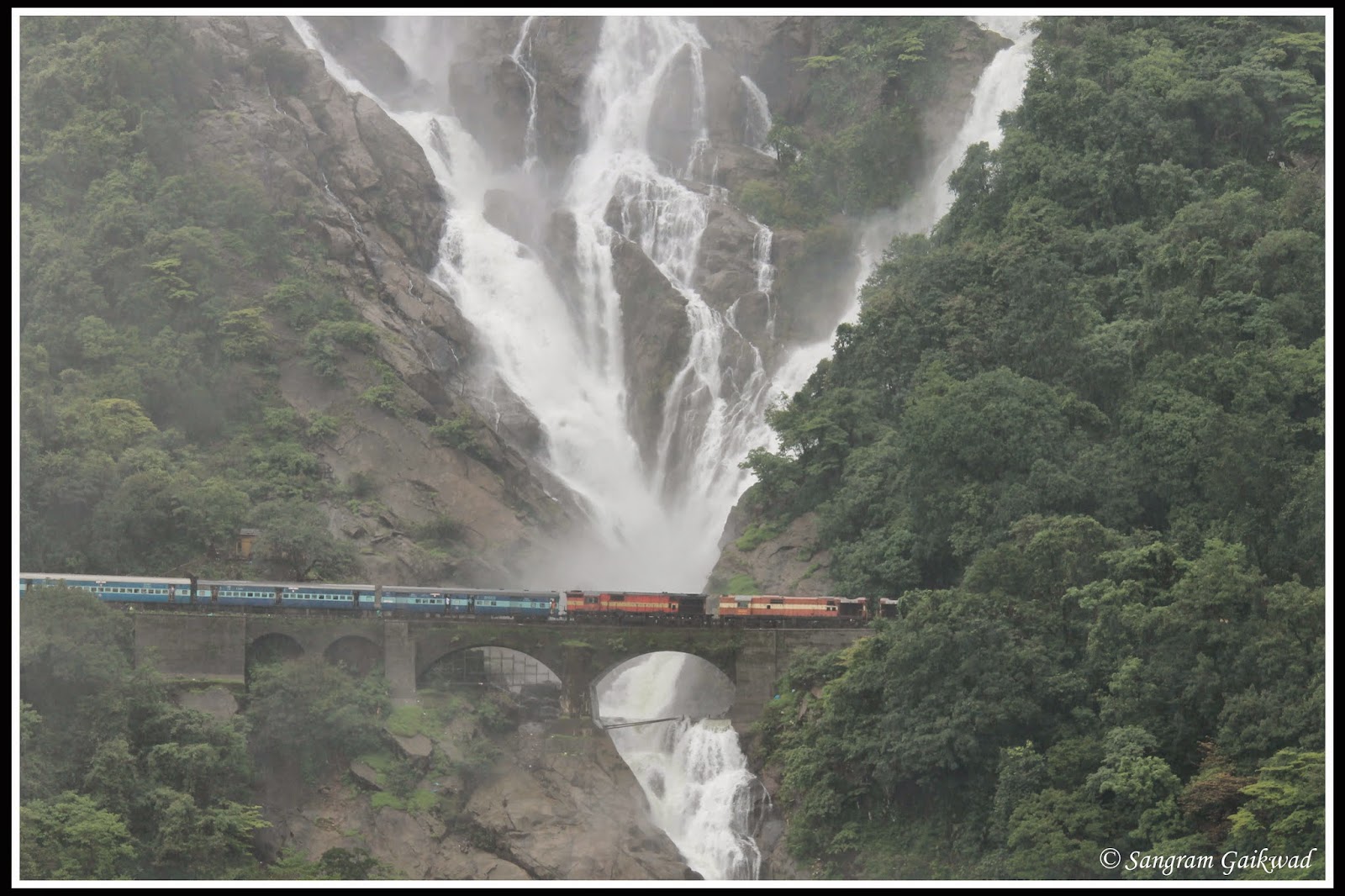 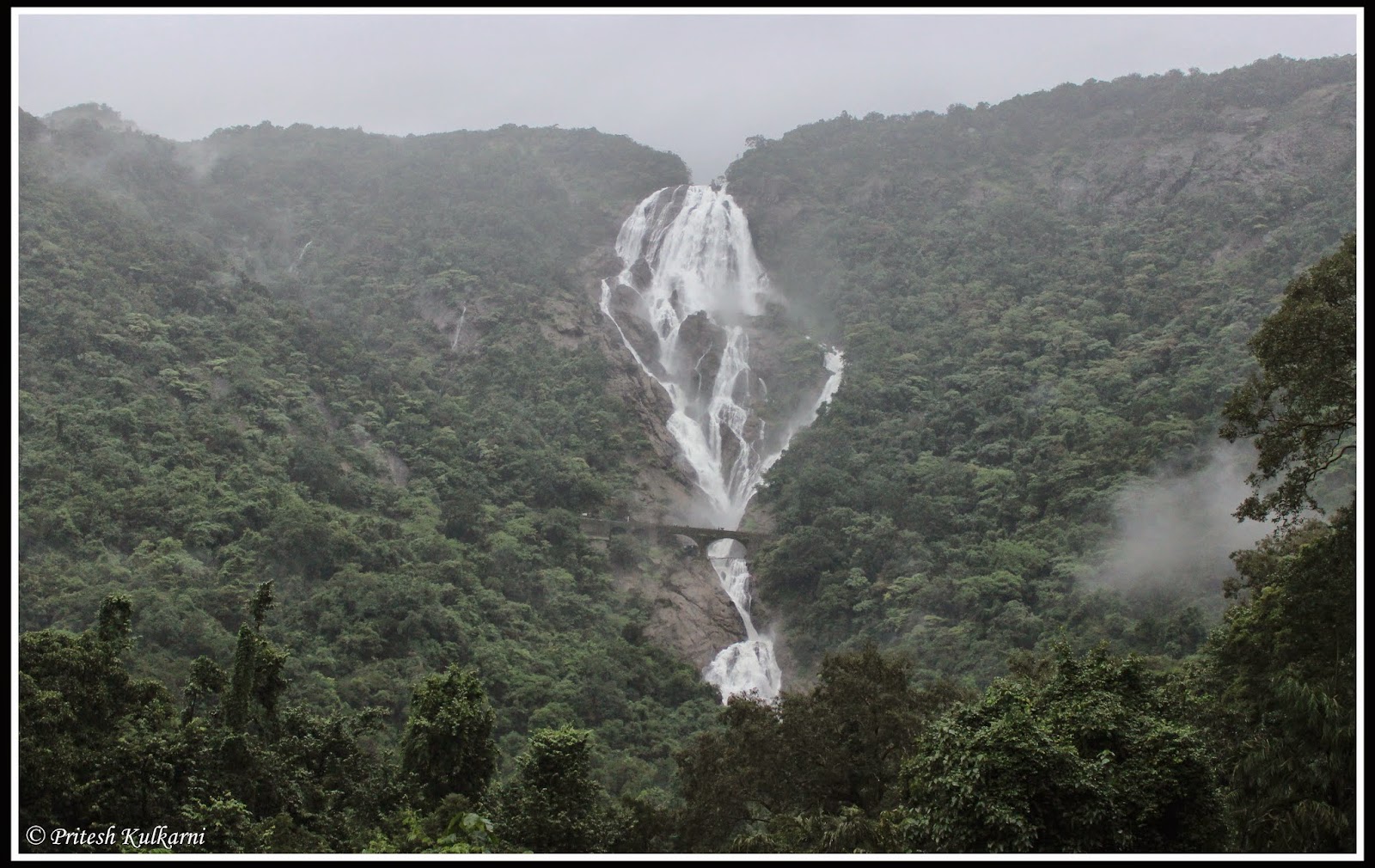 We returned to Dudhsagar Waterfall Bridge after lot of clicks at the viewpoint and in the tunnel no 12 and 13. We saw a massive crowd near the fall. We were lucky enough to view waterfall when there were hardly any people in early morning. We went back to same St Mary’s church. Due to heavy rain, now the same shelter was crowded. We took rest for entire afternoon time and had dry food as lunch .Our reservation was from Kulem station and station master told our wagon’s position. We waited there for 2 hours. Most of the tourists had come to station to catch this train and Dudhsagar station became over crowded. We relaxed as we had reservation but the concern was to catch the train. Finally Goa express came at 5.30 PM to station. After small struggle we manage to catch the train.

Following day we returned to Pune at 3:30 AM, ending one of the most pleasurable rail trek. Now next year, I will visit this place again with some new members.

Tips / Suggestions / My observations:
1. For trekking, Castle Rock to Dudhsagar is the best option to trek (14 km trek on rail line). You need to cross 10 tunnels till Dudhsagar station and 1 more to reach at the fall.
2. Walk towards Kulem from the fall for 2 km to see the full view of waterfall.
3. There is enough space in tunnel to hide if train comes in. Try to sit down on knees in tunnel b'cos you cannot expect all doors are locked properly for goods trains.
4. Train/Engine makes much noise while passing through valley so you get enough time to complete tunnel walk or at least to take design about it.
5. Stations from castle Rock to Kulem are as Castle Rock – Caranzol – Dudhsagar – Sonalium – Kulem.
6. Carry extra dry cloth sets for monsoon trek. It is a typical forest rain.
7. Things to carry for trek are: Torch, basic medical kit, dry cloths packed in plastic bag, mosquito repellent in case of night stay, dry snacks, Coal or other burning material in case of cooking, rainy jacket and most important is camera!
8. On weekend, try to avoid boarding Goa express from Dudhsagar station. As it is last train for Castle rock and most of tourist target this train to board it became difficult to catch. Better to walk towards Kulem and board at Sonalium station after 4 km walk from waterfall. Goa expresses stops for 30-40 sec here.