I was doing lots of trips from last few years. This time I got a chance to go for trek because of my friends. I was a good trekker a few years back and I had been to most the forts during my college days. Somehow I forgot this activity after entering into the work culture. My friend Anannya and Aditya planned night trek to Rajgad and me along with wife Renuka decided to join them.
Trekkers for Rajgad were me, Renuka, Anannya, Aditya and Aditya’s wife Neha.


About Rajgad trek:
Rajgad (meaning Royal Fort or King of all Forts), one of the forts of Maharashtra state situated in the Pune district, the fort is 1318 meters above sea level. Formerly known as Murumdev, it was capital of the Maratha Empire (Hindavi Swarajya) ruled by Chatrapati Shivaji Maharaj for almost 26 years, after which he moved to Raigad fort and made that his capital.
This fort has great historical relevance, as it was Shivaji's favourite fort. The fort can be divided into four different parts based on geographical terrain and fortification. These are the three sub-plateau (Machee) namely Padmavati Machee, Suvela Machee and Sanjevani Machee, and at the centre Ballekilla (meaning "small fort")
This fort has witnessed lots of historic events, including the birth of Rajaram Chatrapati, the death of Shivaji's Queen Saibai, the return of Shivaji from Agra, the antyayatra of Tanaji Malusre to his Konkan village, the burial of Afzal Khan's head in the Mahadarwaja walls of Ballekilla, the strict words of Sonopant Dabir to Shivaji, and the Khandoji Khopade episode.
Rajgad is south-west 60 km from Pune. To reach Rajgad fort base village, the easy way is Pune – NH4 National Highway – take left at Nasrapur–Pali village – Wajeghar.
There are 3 ways to start trek to Rajgad, one is from Gunjavane village which leads to the Padmavati machee. This trek route is mainly known as Chor Darwaza (Secret Doorway).
The second route is also from Gunjavane village but it leads to Suvela Machee. It is better to climb from this way under expert guidance and with professional mountain climbing equipment. I haven’t climbed yet from this route. The third route is via Pali base village which leads to Pali Darwaza. This route is simple but takes longer to climb from here as compared to another route. We decided to go via Pali village.


23rd & 24th Feb 2013: Night trek to Rajgad (Total distance travel by car: 120km + 3hr climb):
On a very short notice, five of us decided and planned to have the overnight trek over the King of Forts. Two members of our group were having an office so we decided to leave Pune after 8 pm on Saturday. By the time we left Pune, it was 9 on the clock. On the highway, we took a small break for fuel and coffee. After having coffee at McD, we left for the base village. I had a fever on Friday so I was a little bit nervous about my stamina. I didn’t want to spoil others mood only due to my health issues. I had taken energy drink (Glucon-D) with me.
We reached base village Wajeghar. From here we went to a small village named Bhosalewadi. This was the starting point for our trek. We parked our car and we actually started our trek by 12:15 am. It was almost full moon night and bright moonlight was helping us to show the route. After walking for few minutes on mildly steep walk-way, about 7-8 feet wide, pretty plain, we reached a small plateau. We can see Entire Rajgad in bright moonlight. From here the actual trek began and so the slightly tough part starts. Now we have to climb massive fort. The moonlight was enough to keep our torches off most of the time. The journey was quite easy and ok as we were walking in the night time. We had to make stops at regular intervals to rejuvenate ourselves. My friends were taking my care during entire trek. After more than hour hike, we reached the point from where the stone steps are laid till the top - they call it as Rajgad Rajmarg (Route which was used by king) 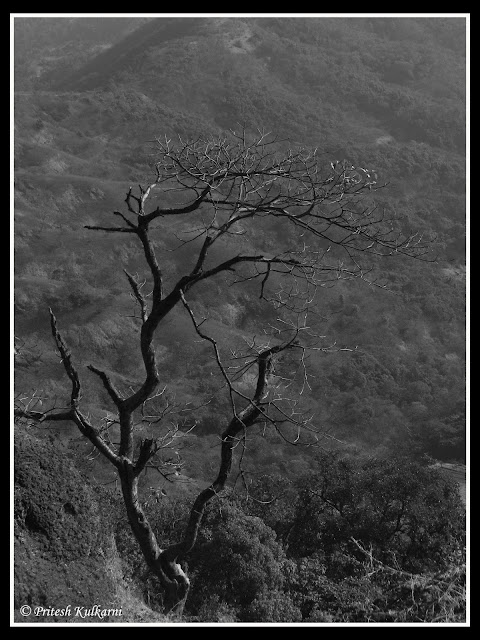 Climbing on stone steps was quite an easy task. After sometime finally, we reached Pali Darwaza. Slowly we moved towards Padmavati machee. We reach on top by 2.30 am. We were sure that will not get any shelter for to sleep so we decided to move ahead for Bale-Killa (Small fort constructed above fort). To climb Bale-Killa at night was a really difficult job. Bale-Killa is the highest part of the fort which has remains of palaces, water cisterns and caves. Generally, Bale-Killa is built to protect your surrounding fort and constructed in such a way that it is difficult to climb and conquer in war. It has a beautiful entrance door called Mahadarwaja. One can view the whole fort and the vast surrounding expanse.

Within 30-40 min we climbed the Bale-Killa. It was a very difficult climb. However, there is a railing on your way up to make the climb possible. It was around 3:15 am on the clock when we reach the top of Rajgad. We found Janani Temple empty so we decided to sleep there. We all were hungry and had our packed dinner. Having your dinner under bright moonlight with the cool breeze was a lovely experience. We did some arrangement in the temple and went inside our sleeping bags for much-needed sleep. Until this point, I was not able to click a single photo and that’s why I was eagerly waiting for morning to capture sunrise photos from Rajgad.
We were up by 6.00 am after hardly 2 hours of sleep. Until this point, we were not able to see surrounding mountain ranges. There was plenty of sunlight but I was waiting for Sunrise. The bird’s eye view from Bale-Killa was something that really cannot be described in words. We were able to see Padmavati machee on our right and Suvela machee on left. Padmavati Machee is the site of Padmavati Temple, Padmavati Lake, Chor Darwaja, Pali Darwaja, Gunjavane Darwaja, DaruKothar (storage of arms and ammunition), Diwankhana, Rajwada (ruins), Ghod Tale (Horse Lake), Sadar (office) and Dhalkathi (flag hoisting place).


Suvela Machee is another grand machee facing east with lots of secret routes and doorways. This one is a double-stepped fortified machee with the steps separated by a beautiful bastioned doorway. At the end of the first step, a hole cuts across the rock; one can sit on this Hole (nedhe). The final (lowest) step like Sanjeevani Machee has a double curtain wall. To the south side of this machee, one can find a beautiful triangular bastion called Kaleswariburuz having an escape door near it. The home of the renowned military leader Tanaji Malusarewas in this machee.


We witnessed beautiful sunrise from Bale-Killa. I was busy in capturing this lovely nature. For few minutes, Sun was spreading orange-red colour light all over the horizon. You have to be there and experience it. You can spot Fort Torna, Sinhagad, Raireshwar, Raigad, Lingana and Purandar. We packed our bags after spending some time a nearby temple and processed to watch remaining Bale-Killa. After climbing few steps you can have a look of beautiful glimpses of Late and temple. On top of Bale-Killa, we saw ruin old time building such as Rajwada, storage of arms and ammunition etc. It was too windy on top of the fort. We forgot all pains which we had from yesterday on the trek when we were on the top of Rajgad. We took some breathtaking snaps before we started climbing down from Balle Killa.

We could not explore Sanjevani Machee and Suvela Machee as we were running short of time. Sanjevani Machee is huge, beautiful and royally constructed Machee faces west and has a three-stepped (layered) fortified structure. The lowest level is beautifully fortified by double curtain walls (chilkhathi) separated by a deep trench, on average 12 feet across. We decided to visit only Padmavati Machee. After we came down from Bale-Killa, we took a small break and had our packed food for breakfast. Being girls in a group gives you an advantage on food department. Renuka and Neha had bought enough food for breakfast.


After heavy breakfast, we proceeded towards Padmavati machee. We saw all historical building there. Many trekkers prefer this machee for stay and to cook food for lunch/dinner. Maybe bcos of this reason this area is not at clean. I really feel bad for it. After sightseeing, we started descending at 11.30 am. We set off for descend to the Bhosalewadivillage through PaliDarwaza. We were ahead of time as we had to reach Pune before 3.30 pm. Descending was not a difficult job but after some time pressure on knee becomes a headache. After descending half, we took a break for 30 min. No reason as such but there was a large tree and we tempted for a power nap. After power nap in the lap of nature, we covered remaining distance with lightning speed. After we reached our parked car at base village, we left this historical place.


Rajgad is truly a place to visit and remember the greatest Maratha King. One must visit the fort and enjoy the nature and the beauty of the great fort. During our return journey, we took a lunch break at Dhaba. After tasty lunch and tempting strawberry Cream with Ice cream, we headed back to our homes. It was the perfect end to an adventurous weekend.


Things to carry for Night trek to Rajgad:
Our Expenses:

Thanks for reading this Travel Blog. Happy travelling.