As monsoon began after long break, we decided to have a trek nearby Pune - Mumbai. On late Saturday evening, we (My wife & I) decided to go for a trek on Sunday. We wanted to step up the endurance level (As compare to Malhargad and korigad) so we decided to go to the Sarasgad Fort

Trekkers for Sarasgad were me and my wife Renuka

About Sarasgad Fort, Pali:
Pali is small village in Raigad district of Maharashtra. This place is just 30-35km away from Khopoli which is located on Pune-Mumbai highway. Pali is famous due to Lord Ganesh temple from Ashtavinayaka. It is also known as Ballaleshwar Temple.

Sarasgad Fort is located behind the Pali village. It is a twin of Sudhagad fort. This fort was mainly used to keep a watch on the surrounding area. Not much is known about the history of this fort. Main attraction for trekkers on Sarasgad is huge size rock steps at the end and narrow route to its Bale Killa.

To reach at the base village of fort from Pune is Pune – Chadani Chowk – Pune-Mumbai highway (you can also go by Expressway) – After Lonavala and descending ghat, take Khopoli exist – Drive till Khopoli main Chowk – Take left at Chowk – Drive for few km till you cross express way from bridge – After crossing bridge, Take left – Drive for 30 km to reach at Pali village.

For Trek route, drive 100-150 meters ahead keeping Pali temple entrance road on your left – Check for Old water well on left – Just few feet before the well you can find information board for Sarasgad fort. Follow the narrow route which will take you to top of fort.


19th July 2015: Trek to Sarasgad fort (Total Distance traveled: 250 km):
We woke up early morning by 5.30 AM and left Pune by 6.30 AM. We preferred Old Pune-Mumbai highway due to less traffic however we came back to Pune via expressway. Drive was wonderful with heavy rain and cold morning breeze. When we crossed Khopoli area, Sun was busy in hide and seeks game with rainy clouds. Light rain showers made us feel fresh. The atmosphere kept changing its mood regularly, sometimes raining and sometimes winds playing with us and sometimes sudden focus from sun glowing up on the wet green vegetation.


We reached at Pali by 8.45 AM. We had some breakfast and then our trek began. This is not a popular trek hence it is not crowded even on weekends. There are a series of interconnected hills of varying heights which gradually lead to the highest hill hosting the fort. First patch was quite easy but with sudden height gain. We somehow climbed carefully. Due to rain, the route was very muddy and slippery. After climbing the first part we took a small break to rejuvenate ourselves.


Second and third part of the hill was easy to climb. Fort is hosted on the third hill. In reality it is one mountain but still I call them as series of hills because there are small flat walk patches between the two climbs. During our climb, one villager told us to take proper care as stone steps had become slippery. Safety is the most important part during trek so we decided that if anyone of us feels the trek route is not safe, we will turn back.


After climbing the hill, we reached at the base of the fort. The last part of trek uphill was indeed pretty interesting. There are few steps cut in the rock patch. Those are more like small footholds than steps. After climbing the small rock patch with the help of rock footholds, you can see a small cave on the left. From this point, the final steep ascent to the top begins. Climbing the steep steps can make you a little tired. Each step is much bigger than a regular step. Most of the steps are about knee high. Take proper care during rainy season as rain water usually flows from these steps.


At the end of steps, we saw a very beautiful main entrance of the fort known as Dindi Darwaja. On Dindi entrance, you can see Kalash symbol carved in stone wall. After crossing Dindi entrance, there are ruined room constructions known as Devdya in Marathi. Few steps from Dindi entrance will take you to the fort. There are 2 ways to reach at the base of Bale Killa. Take right route which is a well defined route. You can see the Fort wall from this side. Left side route after steps is a shortcut with sudden height gain.


We saw a water trench at the base of Bale Killa known as Moti water tank. From this point, again you have two options to reach at the top of fort. Left side route (Considering you are facing the fort) is narrow, shortest and adventurous route but there is no fortification to see while climbing. Right side route is very easy one and you can see many ruined fortifications. We decided to climb by left side route which was a bit difficult whereas while descent we preferred the easier route to see ruined fortifications.


We enjoyed the adventurous route and it was highly slippery. Helping each other, we reached at the top. It was real fun to climb by this route with each other’s help. My advice for others will be - climb from this side in the Monsoon only if you are experienced or if you have an experienced trekker with you. This route is quite easy during other seasons. On top of the Sarasgad fort, there is Kedareshwar temple and a lake nearby. There are two bastions to keep watch on surrounding areas. If weather is clear then you can spot Sudhagad, Tailbaila, Dhangad and Korigad. View of Pali village, Amba River and surrounding area is breathtaking. We took a break for 15 minutes, had our packed snacks and began our descent.

We came down via the easier route. We saw fortifications such as guard rooms, water trench, grain storage room, ammunition storage room, Jail and some caves. Even though it is in ruined condition it is a treat for trekkers. When we reached at the base of the citadel, heavy wind forced us to wait for few minutes. After short break, we came down at Dindi Darwaja.

Apart from us, there was a group of 12-15 trekkers from Mumbai on the fort. As girls from that group were new to trekking, they took more time to descent from rock steps followed by the rock patch. Our descend was quick once the route was clear for us. We took some photographs and then we covered the remaining distance with lighting speed. We reached Pali village at 1 PM. After we reached at our parked car at base, we had snacks and then we left this beautiful place.

Due to major landslide on Express way near Aadoshi tunnel, we were stuck in traffic for an hour. Luckily Mumbai to Pune route was less impacted hence we reached home safely by 5.30 PM.


Click on below links to read other travel blogs on Forts

Waari is a holy pilgrimage in Maharashtra and the participants in the Waari are called ‘Waarakaris’. It is undertaken in the Hindu month of Aashaadh (around June-July). Every year, millions of devotees walk along the 250 km route from Aalandi (near Pune) to PandharPur (near Solapur). The Varkari tradition has been part of Hindu culture in Maharashtra since the thirteenth-century CE.

Events such as Ringan and Dhava are held during the pilgrimage. During the Ringan, a sacred horse called Maulincha Ashva, who is believed to be the soul of the saint whose idol is being carried in the litter, runs through the rows of pilgrims, who try catching the dust particles kicked off and smear their head with the same.Dhava is another kind of race where everyone wins and it is held to commemorate the manner in which Tukaram first saw the temple at Pandharpur and started running in sheer exhilaration

The WARI tradition dates back into times. Saint Dnyaneshwar’s great grandfather – Trymbakpant Kulkarni – used to walk the WARI from his native Apegaon to Pandharpur. Saints Dnyaneshwar, Namdev, Sawta Mali, Chokhoba and Tukaram used to participate in the WARI in their own life times. The tradition of the present ‘PALKHI SOHALA’ (literally WARI of festivities) can be traced to the year 1685 around 36 years after Saint Tukaram attained divinity (1649). It was initiated by Taponidhi Narayan Maharaj Dehukar, son of saint Tukaram. The ‘PADUKAs’ of Saint Tukaram would be carried over to Alandi where along with the ‘PADUKAs’ of Saint Dnyaneshwar they would form the WARI inching towards Pandharpur to meet their Lord Vitthal (God).

It was not possible for us to walk with Wari for 250km hence we experienced 3rd day Wari from Pune to Saswad.. Distance between pune and saswad is 29km.

Some clicks taken during Waari: 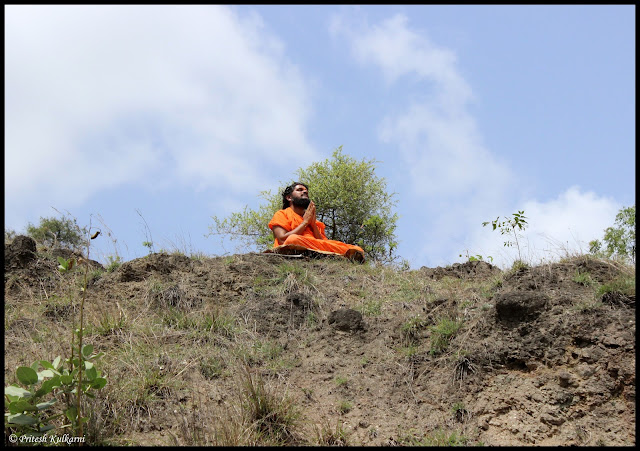 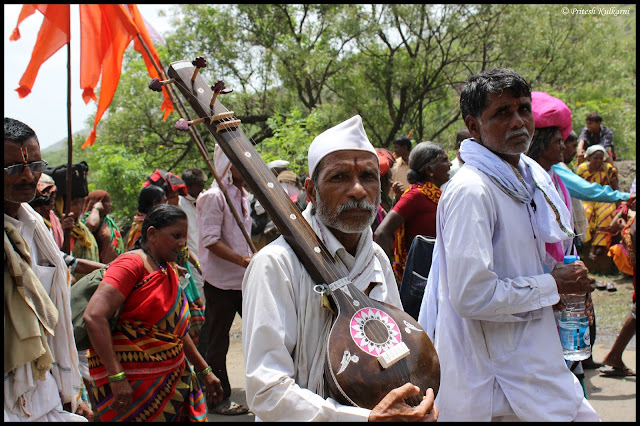 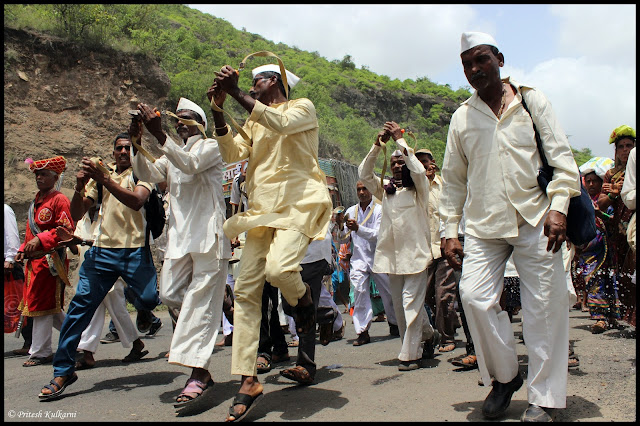 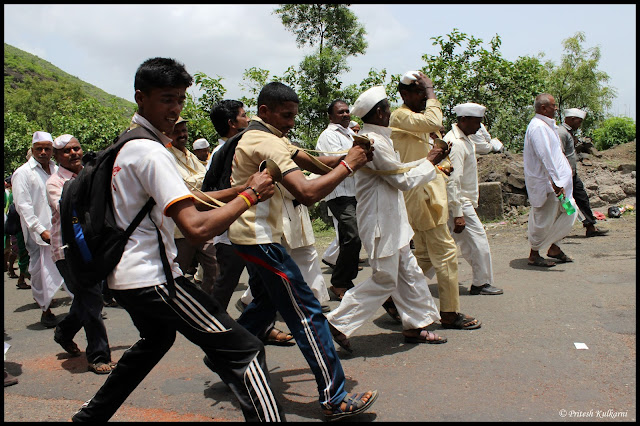 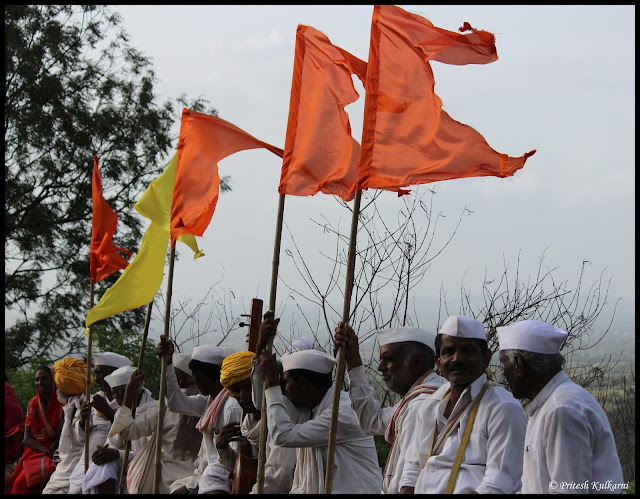 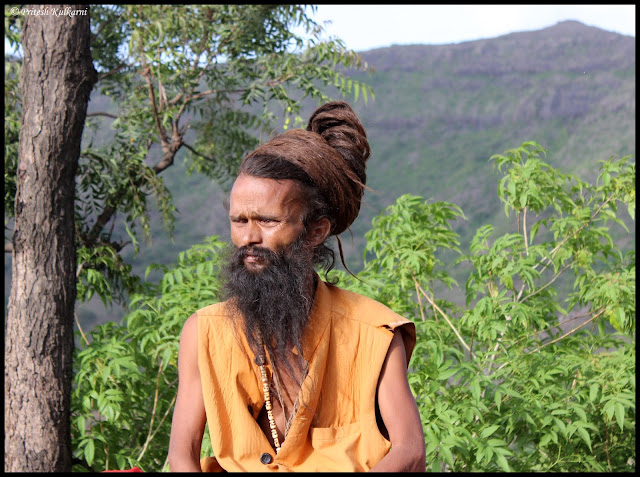 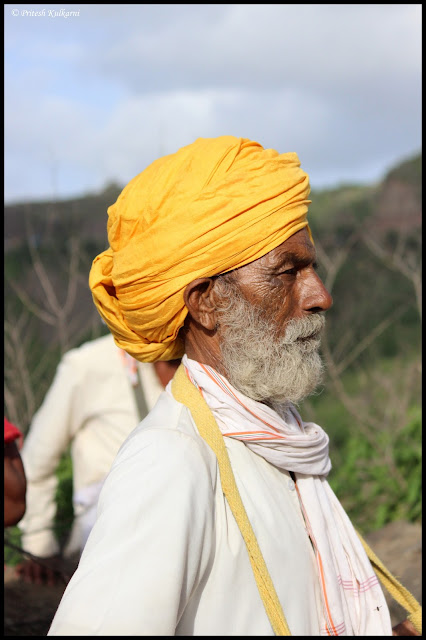