Three years back, I have been to Madhe ghat and again I wanted to visit same place in this monsoon. It is a perfect combination of ghat, rivers, waterfalls, lush green nature and small villages surrounding them. A must visit place for nature lover and Photographers.

Travelers for this trip were Me, Wife Renuka and my parents.

About Madhe Ghat:
Madhe ghat is located around 55 km south west of Pune bordering Raigad district and in the vicinity of Torna Fort, Rajgad, Raigad and backwaters of Bhatghar dam. From this place, you can have a view of vast area such as Raigad fort, Lingana, Varandha ghat and Shivthar Ghal. This place is very cold and is a developing hill station.

In history, when the great warrior Narveer Tanaji Malusare died in the Sinhagad battle, his body was to be taken for last rites in his native village Umrathe near Poladpur. Tanaji Malusare's funeral procession was taken to his native place from this Madhe ghat route.

There are two routes to reach at Madhe ghat, Either by Pabhe Ghat or by NH-4 route.

9th Aug, 2015: Madhe Ghat (Distance traveled: 132 km)
We started our journey at around 7 AM on a Sunday morning by car. Weather was quite cloudy and we were expecting heavy rain. After crossing Khanapur, we saw left turn to Pabhe ghat. I was aware of route so quickly we drive to Velhe village via Pabhe ghat.

Once we reached near Velhe village, we were able to spot Torna and Rajgad fort but it was covered by clouds. Now we started feeling very hungry so took break at a small restaurant. Owner served us tasty Omelet and Fried Bread. Weather was freezing cold and we were having very tasty breakfast. That was awesome breakfast.


After Velhe village, we took left turn for Madhe Ghat. Road condition is very bad except 8-9 km road patch. Forest was very dense and sometime it was difficult to spot road after taking some crazy curves. After crossing few mountains we saw spectacular view of Sahyadri ranges. You need to cross at least 4-5 Mountains to reach at Kelaad village. Sign board helped us to spot the Madhe ghat route and we took a left turn and crossed a small bridge. From here onwards either you have to walk for last 1.5km road patch. B’cos of monsoon, many people prefer a walk after that small bridge. We preferred to walk to reach at the top of Madhe ghat. The road ends at this point and offers you an amazing view.


When we arrived at Madhe ghat, we saw that this area is very plain and flat reminding you of the table land at Pachgani. Entire area was covered with thick fog and clouds. We were neither able to view valley view nor waterfall. We waited for some time and then Proceeding towards the edge of this mountain, we are able to see a gigantic waterfall falling over the exposed rock directly into the valley of 2500 feet falling in the Shivthar River in Konkan. Due to clouds, I hardly manage to click photos of waterfall but we enjoyed weather.


We clicked many photos of waterfall and surrounding area spent some time with the small water falls. Many people are aware of this place due to social media hence you may expect crowd on weekends. I loved this place. We spent more than hour and then started with our return journey. Few kilometers ahead of Madhe ghat, you can see one more waterfall. To view that falls, you may need to some trekking. Due to weather condition, we skipped that but decided to visit again for photography and second waterfall.
For return journey we choose NH-4 path. After 30-33km we touched national highway 4. We reach home by 5 PM in the evening. It was truly stress–relieving nature trip. I hope you enjoyed reading my blog and planning to cover this lush green, breathtaking waterfall view spot in this monsoon. 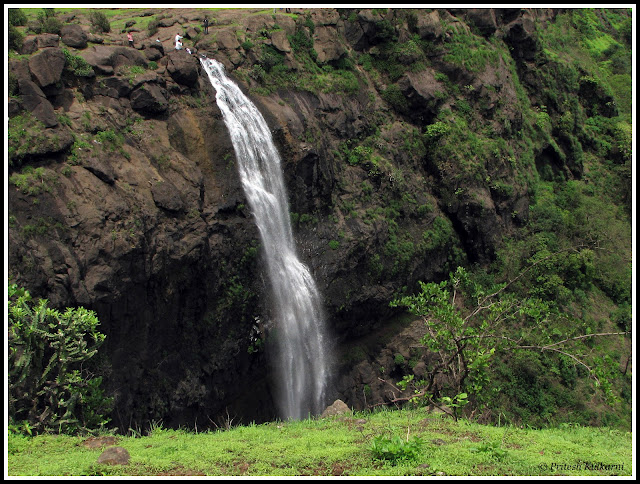 Pritesh Kulkarni
Pune
Posted by Prits at 22:00 No comments:

I was planning for quick half day trip in monsoon. I decided to visit Bedse Caves as it is one of the few places less crowded and worth visiting.

I was the solo traveller for this trip.

About Bedse Caves:
Bedse Caves (also known as Bedsa Caves) are situated in Maval area, Pune District. Bedse Caves are comparatively less known and less visited. People know about the nearby Karla Caves and Bhaja Caves but have hardly heard of Bedse Caves. The trilogy of the caves (Karla - Bhaje - Bedse) in Mawal Region can't be completed without Bedse.

Another route is Pune -> Chadani Chowk –> Pirangut –> Paud –> Take a right at Paud after Bus stand –> Hadashi (No need to take Hadashi temple route) –> Javan –> Pavananagar village -> Take right for Bedse village –> Drive for 1.5 km to reach at the base.

18th August, Bedse caves 2015: (Total Distance traveled: 139 km):
I started journey at around 6 AM. In morning I decided to go for a half day trip. Always advisable to start the journey early morning so you can spend more time nearby the caves area. Also Bedse cave is east facing so prefer visiting in the morning time. I usually travel to Mumbai/Lonavala by Express highway so the old highway was a good change. Old Highway is in a good condition – it’s smooth and wide.
I took left at Kamshet for caves. Cave is about 6km from highway. Weather condition was cloudy with light rain shower. Sometimes rain and sun were busy in their hide and seek game. Soon I reached at base village Bedse. From this point cave is hardly 1-1.5km. Around 100meter before cave, there is enough parking space. After parking the car, I began climbing to the cave. For caves, you have to take stairs route. The climb is steep and if you are not regular at exercise, you will definitely need to take at least one break. Due to an odd day, I was the only tourist there. Within 20-25 min without any break, I reached at the cave.

The caves appear suddenly from one point on, and what you see is some fabulous architecture. The most impressive cave is right at the entrance, with open, horseshoe-arched entrance. The best known cave is the chaitya (prayer hall) with comparatively large stupa, the other cave is monastery - vihara. There are many small rooms around Vihar. There is also a small "Stupa" outside to the right of the main caves.

There are total 12 water trenches within the cave area. Locals say, rain water from rocky mountain drips into the trenches and it is perfectly filtered water. Even during summer, these trenches contain a lot of water. Entire place is a masterpiece of architectural design... as always one wonders how people must have built them in the 1st Century AD.

After some research and information from the locals, I got to know very interesting fact about Bedse cave. The people (Buddha) who carved these caves followed one specific technique. After carving the cave, they use to remove all rocks which were in front of caves. Due to some unknown reason, Bedse cave was incomplete and hence rocks in front of cave aren’t removed. Due to these rocks, no one can spot the caves from distance or from the base. It has helped to retain Bedse cave in a good shape from Mughal or British attack.

There are few monk rooms above cave area but for that you need to climb a little bit. At the end of cave area, there are rock-carved steps which lead to few monk rooms. This route is closed/banned in monsoon. There is one waterfall which you need to cross. Route is highly slippery and if you miss single footstep then you may fall down causing fatal accident. I checked that route but skipped the rooms considering safety factor.

After spending an hour, I came down in 10 minutes. For return journey, I preferred Pavana – Paud route. From Pavana Nagar village, there are 2 routes; one goes to Lonavala and other to Pune. I drove few km towards Lonavala to enjoy the scenic view of Pavana dam. You can also spot the four fantastic forts from Maval area namely Lohagad fort, Visapur Fort, Tung Fort and Tikona Fort. After enjoying nature’s monsoon beauty, I reached home safely by 12.30 PM

Other places which you can combine with Bedse caves for Day picnic:
Other related Blogs
Expense: