Our plan to Visit Mahalaxmi Temple (Our Kuldevi) was due and hence we planned a weekend trip to visit Temple along with Panhala fort and Pawankhind.
Travelers for this trip were I and Wife Renuka.


About Panhala and Pawankhind
Panhala fort is around 20km away from Kolhapur. It was one of the important forts to keep watch on Deccan region. Notable events linked with Panhala were the escape of Shivaji Maharaj from Siddi Jouhar’s trap followed by Battle in Pawankhind, the capital fort of Kolhapur state, queen Tarabai’s life etc.
Pawankhind is located around 66km from Kolhapur and 18km from Amba Village. It is famous for Battle of Pawankhind which between Siddi Masud of Adilshah and Great warrior Baji Prabhu Deshpande of Maratha empire.
To reach Panhala from Pune is Pune - Natinal Highway 4 - Satara - Karad - Kini - Take right at Vathar Tarf Vadgaon Village - Panhala.
We went to Panhala from Kolhapur which is just 20km
To reach Pawankhind from Pune is Pune - national Highway 4 - Satara - Karad - Take right at Pachvad Phata - Kokrud - Malkapur - Amba - Take a left at Amba Village - Pawankhind
There is a direct route from Malkapur to Pawankhind via Pandharepani. The road is narrow with a few bad patches.

15 June 2018: Pune - Kolhapur:
We left Home by 7PM after our office hours and had dinner near Wai Junction. After Dinner, we went to Kolhapur and reached a relative’s place by 11:30PM.

16 June 2018: Kolhapur - Panhala - Amba:
We woke up in the morning and went to Mahalaxmi Temple for Darshan. Temple is dedicated to Goddess Laxmi/AmbaBai which is considered as one of the 108 Shakti Peetha as per Hinduism. 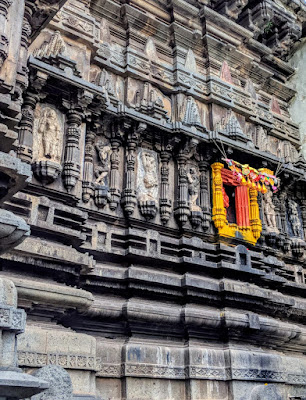 After Darshan, we visited the famous Misal Joint “Gavran Misal”. It is located in Rajarampuri area. Misal Joint is relatively new in Kolhapur and gained popularity in quick time. Like the rustic look and Misal was tasty.


We left Kolhapur by 11AM for our next destination which was Panhala Fort. It was just 20km Away from Kolhapur. Fort can be seen by own vehicle as the proper road is available to reach every point. Panhala Fort was built by King Bhoj 2 from shilahar dynasty in 1178 to 1209 CE. Fort came under Adil Shahi dynasty of Bijapur in 1489. The major fortification was built in this period. Shivaji Maharaj took Panhala after the death of Afzal Khan in 1659. In 1660, Siddi Jauhar lays Siege to Panhala. After 5 months siege, Shivaji Maharaj able to escape with trusted Commander Baji Prabhu Deshpande. After Famous Battle of PawanKhind, Baji Prabhu Deshpande lost his life to secure Maharaj’s Life. Fort was recaptured in 1973 by Shivaji Maharaja’s warrior kondaji Farzand with only 60 brave warriors. Panhala came under Kolhapur king and then to British Raj.


We visited Andhar Bavadi first at Panhala Fort. Andhar Bavadi means Hidden well. It was the drinking water source of Fort. Well is 3 story building with rooms around it. It looks like building from ground to misguided under attack.


Teen Darwaza is located near Andhar Bavadi. Teen Darwaza (Means Three Entrance gate) is the main entrance of Panhala Fort and located on West side of Fort. There is a court between the first two gates. Inner gates are decorated with beautiful carving and Lord Ganesh idol is also carved on the gate. you can see Persian script on the outer gate (Gate to enter inside fort from the west side) which says Gate was built in the reign of Ibrahim Adil Shah I by Malik Daud Aki son of Minister Ahmed in 954 as per Islamic calendar (1534 CE)


Our next destination was Ambarkhan. It consists of three buildings (Ganga, Yamuna, and Saraswati) which were used to store grains. Ganga Kothi (Storage building) is the largest building amongst the three. There is one temple dedicated to lord Shambu Mahadev. When Sambhaji Maharaj successfully returned to Panhala fort from the Dilerkhan's trap then Shivaji Maharaj came to Panhala to meet his son Sambhaji Maharaj. This was the last epic visit (Dec 1679) of Father-Son (Two great King of Maratemperorror) before Shivaji Maharaj's death (3 April 1680).


After Ambrkhana visit, we went to Pusati Bastion and Rajdindi route. Rajdindi route was the route by which Shivaji Maharaj escape to Vishalgad during the battle of Pawankhind. You can climb down from this route and it is a popular Panhala-Vishalgad trek route.


Our next place to visit was Sajja Kothi. It was built by Ibrahim Adil Shah in 1500 and the main purpose is to keep a close watch on the valley. Sambhaji Maharaj was house arrest for sometime in Sajja Kothi. The place is not maintained well. After a quick visit, we took Darshan of Goddess Ambabai of Panhala fort. Ambabai is the oldest temple from the fort and Shivaji Maharaj used to visit before any major expedition. Tarabai Palace was closed hence we were unable to visit the place.


We left Panhala fort and headed towards Amba Ghat. We booked Room in Kasturi farmhouse which is 4-5km before Amba Village. When we reached Near Amba village, Monsoon clouds took control of sky and it tempts us to visit Amba Ghat to enjoy the monsoon moods rather than a hotel check-in. We settle down at one of the valley viewpoints and enjoyed the rain shower over Valley. To our surprise, there was hardly any traffic in the ghat (Generally it is quite a busy route to enter in South Konkan) section. Heavy rainfall in the valley, different shades of grey color in the sky trying to suppress the variation of green in the valley, Sunlight on the horizon keeping everyone's hope alive and windy cool breeze adding more drama made our evening more special. The nature stage was perfectly set for two nature lovers.


We came to the hotel "Kasturi farmhouse" after 7PM. They have species room attached with a small kitchen and bathroom. Rooms are clean and all the required facilities are available. There is a huge plantation behind the farmhouse. They have built up walkways to explore their plantation area as well.

We woke up by 6.30AM and left for Pawankhind. It was around 22-24km from the hotel. On the way to Pawankhind, you can visit Manoli Lake and waterfall. As it was a start of the monsoon, Waterfall was not active. We move ahead and route from the forest is very scenic. We Took multiple pitstop to enjoy the forest view or valley view. We reached Pawankhind by 9AM.


Ghod-khind was the actual name of Khind (Mountain Pass). Battle of Pawankhind was between Baji Prabhu Deshpande from Maratha Empire vs Siddi Jauhar from Bijapur Empire. Shivaji Maharaj escaped successfully from Panhala fort along with 600 warriors on a dark night of 13 July. Warrior Shiva Kashid dressed like Shivaji Maharaj and misguided the enemy. It gave time for Maharaj and 600 warriors to escape towards Vishalgad. In pursuit, Adilshah sends 10,000 armies for the chase. After crossing Pandharpani plateau, it was clear that Maharaj cannot reach Vishalgad without a battle. Trusted commander Baji Prabhu Deshpande decided to Battle with just 300 warriors against an army of 10,000. Ghodkhind (Now Pawankhind) was the perfect place as only a few soldiers can pass at a time. Baji Prabhu Deshpande assured that he will fight till Shivaji Maharaj reach to the Vishalgad.

Great 300 warriors took place in the Ghodkhind. Baji Prabhu Deshpande with two swords in hand took lead. Heavy Battled began and Baji Prabhu was wounded in it. He was still leading the battle. Adhishah's army repeatedly tried to break the defense but failed. Battle continued for 4-5 hours with strong defense till they heard Cannon fire from Vishalgad which was the announcement of Shivaji's return to Vishalgad. Around 200+ out of 300 great warriors died in the battle from Maratha whereas more than 1500 adhishah's soldiers killed in the battle. Baji Prabhu Deshpande sacrifices his blood to protect his King and died in the Ghodkhind after cannon fire announcement from Vishalgad. The defense of the pass of GhodKhind by about 300 Marathas led by the Baji Prabhu Deshpande was renamed as "PawanKhind” which means “The Battle of the Sacred Pass”. In Marathi, Pawankhind name described as "बाजीप्रभूच्या रक्ताने पावन झालेली खिंड म्हणजे पावनखिंड".


Adhishah returned from Pawankhind after a heavy loss. Shivaji Maharaj later visited Baji Prabhu's house and honored his family. You can visit the newly built memorial. From the memorial, steps go to Pawankhind. There is a narrow path to climb down in the Pawankhind. you can witness waterfall in the monsoon season. We spend some time in the Pass and then return back. Panhala to pawankhind 52km trek is famous in the monsoon.

We had lunch in Amba village and left the place for Pune. We returned Pune via Malkapur and reached home by 9PM.


Thanks for reading this Travel Blog. I will try to upload more and more travel blogs.

As monsoon begins, it was time for a quick half day trek. We were looking for an offbeat location to avoid the crowd and come up with the kailasgad option.

Trekkers for Kailasgad were I, friends Himanshu, Piyush, and Aditya.

About Kailasgad Fort
Kailasgad fort is located in Mulashi area near backwater of Mulashi Dam. There is hardly anything to see on the fort but the trail to the top is more beautiful.

9th June 2018: Pune - Kailasgad Fort (Total Distance: 150km):
We woke by 5AM and left Pune by 5:30AM. The weather was perfectly set for trekking conditions. Light rain, Dark clouds, and cool breezes make the journey more joyful. We had breakfast break at JP’s food court, Mulshi village. We reached at Base soon and parked a vehicle on the road. There is Signboard which indicates the way to Kailasgad Fort.

Trek begins with a Small hike on Hill and the same Hill is connected to Kailasgad. The route is narrow with exposed to the valley on your left side. The route was bit slippery but manageable. It takes around 45 min to 1 hour to reach the top of Fort. If you want to enjoy the beauty of the trail rather than Fortification then this is the perfect offbeat trekking place.

While climbing, you will come across a small monsoon waterfall (It is only inflowed during Rainfall). Just take right side direction rather than crossing water stream to continue to reach on the top. Route marks are not clearly visible which may mislead you.
You can see the Swaraj flag on the top of the fort. View of Backwater and mountain range is simply breathtaking. The expert believes that fort was built during Saatvahan era and No fortification is available on the fort. You can see some ruined rock structure which looks like a ruined house. There is Shivlinga carved in Stone at the end of the fort.

We begin our returned journey and climb down in 30-40 Min. It is a short trek and better to club with Ghangad fort. We took stop at andharban valley viewpoint. View of Andharban valley is simply awesome. Andharban is famous jungle trek of 12km which goes through the dense forest.
After spending some time at Valley viewpoint, we returned home safely by the lunchtime. 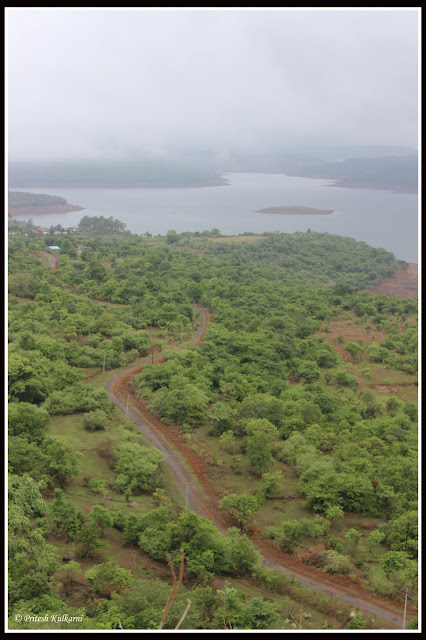 Thanks for reading this Travel Blog. I will try to upload more and more travel blogs.