As monsoon begins, many trekkers booked their calendar for treks nearby Pune and Mumbai. I’m also interested to start some trekking activity this monsoon. On late Friday evening, we (My wife & I) decided to go for a trek on Saturday. This time we decided to complete the trek with the help of public transport.

Trekkers for Lohagad were me and my wife Renuka

About Lohagad fort and trek:
Fort is situated 52km from Pune in western India. It is at an elevation of 3,450 feet (1,052 m).Lohagad village is the base village for the fort. Now Lohagadwadi village is easily accessible by road. Trekker usually starts there trek from Malavali railway station. It is just 9km away from the station.
Lohagad has a long history with several dynasties occupying it at different periods of time. Some historical records say, Satavahanas, Chalukyas is the first one to reach this place. Shivaji Maharaj captured this fort in 1648, but he was forced to surrender it to the Mughals in 1665 by the Treaty of Purandar. Shivaji Maharaj recaptured it in 1670 and used it for keeping his treasury. This fort was used to keep the loot from Surat. Later in Peshwa time, Nana Phadanwis used this fort for living for some time.
There are many places to see on the fort. The first entrance door is known as Ganesh darwaja (Lord Ganesh entrance gate). Other entrance gates in the sequence are Narayan darwaja, Hanuman Darwaja and last entrance gate is known as Maha-Darwaja. The highlight of the fort is Vinchukata (Scorpion's tail) which reminds us of 'SanjeevniMachi 'of Rajgad. It is 1500m long & 30m wide part of the mountain, separated from the main part. Viewing from the fort this portion looks like scorpion’s sting and hence it is called 'Vinchu Kata'. This 'Vinchu Kata' was used for keeping a watch on the nearby area. 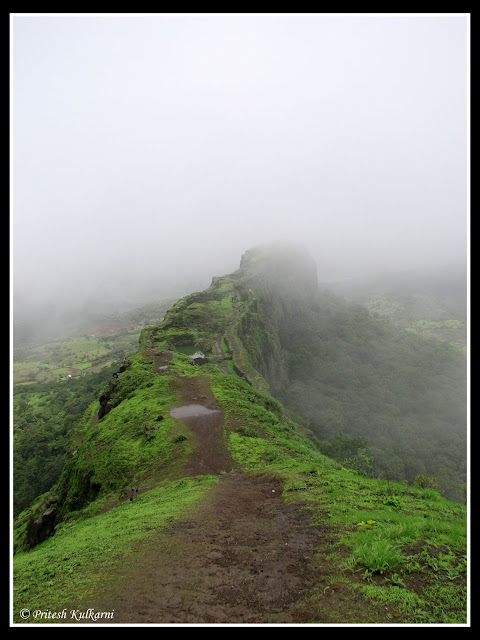 There are 2 ways to start trek to Lohagad fort, one is from Malavali station. After crossing the Express-Highway & reaching Bhaje village we get a straight route to Lohagad. After walking for 1.5 to 2 hours & turning to the right from `Goumukh Khind` we will reach to Lohagad. Turning to left we reach Visapur fort. Another route is from Pawna side which I’m not aware of it.

22nd June 2013: Trek to Lohagad (1.25 hr. of local train + 2-2.5 hr. total climb):
On a very short notice, we decided and planned to do the Lohagad trek on Saturday. We woke up early morning and caught 6.30 am a local train from Pune station for Malavali. I was expecting a rush in local but very few seats where occupied by travellers. We reached on Malavali railway station after around 70 min. Without wasting any time, we started our first trek patch. After the 1.5-2km walk we reached Bhaje village. We had some breakfast and then our trek began.

The weather was perfectly set for trekking conditions. Sun was busy in hide and seeks game with rainy clouds. After crossing Bhaje village, there are 2 routes, one leads to Bhaje caves and other is to Lohagad fort. There was a route from Bhaje caves to Lohagad but I was not aware so I took the winding path for our trek. We crossed 2-3 waterfalls in route. After crossing 2 bridges (small bridge to bypass waterfall), there is a small route on the left side which is shortcut with sudden height gain. We took that path. It goes through dens small forest.We had to take stop once to rejuvenate ourselves. After walking for some time we reached `Goumukh Khind`.

Tar road is newly constructed for last 20-30% patch. From Goumukh Khind, we took a right turn for Lohagad fort. By taking a left turn, you can go to Visapur fort which is very close to the Lohagad fort. After few km walk, we reached fort’s base village named Lohagadwadi. Rain welcomed us when we reached base village. From this point, stone steps are laid till the top. Climb to the top of the fort should take around 45 mins.During the rainy season, water flows on the steps making them a bit slippery. It was raining heavily so we didn't get a chance to click any photo. Fort was surrounded by clouds so we were not able to see anything. Climbing on stone steps was quite an easy task and we reached the top soon. We were walking in clouds and unable to see any natural beauty around the fort. Once you entered by last Darwaja (entrance gate), you can see an old Darga on left.

We hardly took a pit stop at the top and marched towards Laxmi Kothi (Laxmi caves). It is a big cave where 50 people can stay. The Kothi has many rooms.This Laxmi Kothi was used to keep the loot from Surat. With the help of a torch, you can explore all rooms of Kothi.  We moved ahead towards Vinchu kata from Laxmi kothi. On the way to Vinchu kata, you can see newly built Dargah. This is the tomb of Sheikh Umar.

After few min walk, we reach the starting point of Vinchu kata. As I mentioned earlier, it is a 1500m long & 30m wide part of the mountain with a bastion on the end, separated from the main part.We waited till cloud got away and gave us a beautiful view of Vinchu kata point. Soon rain stopped and the sun came out to show us the way. There are 2 ways to go to Vinchu kata. One is by crossing difficult rock patch and other is a very narrow route (with exposed view on the left side). Due to the monsoon, we selected narrow route which was much safer than the rock patch. Better not to try rock patch if it’s raining or the weather is cloudy. After the narrow route patch, there is a simple walk to reach bastion. When we reached bastion on Vinchu kata, the weather was cleared and we enjoyed the beautiful view. We took some rest and after taking some photos, we started with our return journey.

It was 1 in clock and now many trekkers were approaching towards Vinchu kata. We were lucky as we covered all main places within time. By the time we left Vinchu kata, rain shower begins heavily. It was like god paused rain shower for us so we can see the view from Vinchu kata. Now only the place was left was Shiv temple from the fort. We crossed the small lake and reached small temple of Lord Shiva. There is few small lakes nearby temple area. After our fort sight seen, we left the fort and reached the base village.

We started descending at 1.30 pm. While descending the fort, we saw strong massive fortification. Took some photographs and then reached the base village. We were too hungry and ordered Pithle-Bhakri in a local restaurant at the base village, Lohagadwadi. Food was average but as we were hungry, we found delicious. As we wanted to catch local by 4.30 pm, we started with our return journey. Within an hour we reached Bhaje village by 4 pm. We took auto so can easily catch the train.

When we reached Malavali station, we got to know that there is no local as such between 3.40 pm to 5.30 pm. But then railway staff suggested us to go by a passenger shuttle train and the Local ticket is valid for this journey. We board shuttle train by 4.30 pm and reached Pune station safely ending pleasurable trek in monsoon.

Thanks for reading this Travel Blog. Happy travelling.
Pritesh Kulkarni
Pune
Posted by Prits at 18:00