Trip to Kelshi, Velas and Dapoli

We wanted to visit Konkan area before monsoon begins. We got an invitation of our relative to attend a family function at Dapoli and we thought of attending this function along with a short Konkan trip. Last time we had a trip to Dapoli area but due to lack of time, we were unable to visit Kelshi and Velas area. This time our target was to explore Kelshi and Velas.

About Kelshi and Velas:
Kelshi is a small sea-side village, Famous for its Mahalaxmi Temple (350 years old temple), Sand hillocks and Yakub baba's dargah (7th Guru of Chattrapati Shivaji Maharaja), built during the Peshwa era.Also Beach is very clean and hardly any tourists visit this place. You can feel typically Konkani lifestyle in Kelshi.
Velas is small village, famous for Olive Ridley turtle population that visits the Velas beach every year and lays their eggs during winter time. Best time to visit Velas is from Jan mid to March end. Bankot Fort is also few km away from Velas.
Our first halt was at Dapoli so we prefer route as Pune – NH4 – Take right at Bhorphata – Varandhaghat – NH17 – Poladpur – Take right at Bharana Naka, Khed – Dapoli. To reach at Kelshi, You can select route as Dapoli – Harne – Anjarle (You can bypass this place but you will miss beautiful drive along with costal line) –Kelshi.Sign boards are available to guide you. This route was too curvy in Varandha ghat.
For return journey, we came by Dapoli – Khed – NH17 - Poladpur– Mahad – Mandgaon – Nijampur – Thamhini Ghat – Pune.


Traveller for this trip were me and my wife Renuka.

Day 0: 30th May 2013, Pune to Dapoli (Total Distance traveled: 201 km):
We didn’t want to waste our holiday morning in travelling so we left Pune on Thursday after office hours. We left early in evening to avoid late night drive through Varandha ghat. We left Pune around 4:45 pm. Without wasting time, we reached Varandha ghat. Ghat road is narrow and too curvy. Driving in this ghat was bit boring considering summer time. We took our first break at the top of Varandha Ghat. There are lots of Food stalls. We were here on weekday so hardly any travelers were there. It was sunset time so we spent time watching different shades of color in sky along with tasty Vada-Pav and cup of coffee. After 30-40 min brake, we moved ahead.

Without any other break, we reached Dapoli by 9.30 pm. We stayed at our relative’s place and we decided to move to Kelshi by tomorrow.


Day 1: 31st May 2013, Dapoli – Asud - Kelshi (Total Distance traveled: 52 km):
We woke up by 8.30 am in morning and after breakfast, went to visit few relatives from Dapoli. We left Dapoli by 11 am for further trip. Our first destination was Asud’s Ancient Keshavraj temples. It is hardly few km away from Dapoli. A Keshavraj temple is in the midst of scenic hills. Way to Keshavraj is a small trek passing through coconut, betel nut, Mango, Jackfruit, White Jambu fruit (Jam in Marathi) and cashew trees. We enjoyed our small trek and ate lots of fruits while trekking. Keshavraj Temple is built by Pandavas meaning that it has its origin more than 1000 years ago. Temple is devoted to Lord Vishnu and its main attraction is the Goumukh from where water flows throughout the year.Originating of fresh water is from a tree trunk.

After spending lot of time on scenic hill and in Temple, we went to Karde for lunch break. We had lunch at New Swapna Sagar Nivas. We took rest till 4 in Karde and went for Harne’s fish market to buy some fish for dinner. Harne fish market is assumed to be one of the largest suppliers of fish to Maharashtra and also Export.There is an Auction carried on daily basis on the beach.We saw some auction and then purchased Pomfret and Surmai (King fish) fish for Dinner. You need to bargain a lot before buying any fish. Simple formula can be, ask for the half price rate and then add few bucks to settle the final deal. We purchased 4 large sized Pomfret and 1 medium sized King fish.

By 5 pm, we left for our final destination Kelshi. Kelshi is typically kokani village and takes you to old time Konkan village. Our relative already told us where to stay and we straight away went there. We stayed at Homestay hotel name “Surabhi”. Room was bigger, clean and within our budget. After putting bags in room, we immediately went on beach for sunset. Due to cloudy weather, we missed sunset but we enjoyed lovely and lonely beach. There were hardly 5-6 tourists including us. Beach is not a sandy but is in bit dark brown color. Flow of tourists ismainly in Karde, Murud or in Anjarle beach so Kelshi beach is quite lonely.We spend some time on beach rather than entering in water for swimming and then came back on room to get ready for dinner.

For dinner, we went at different home named Pawar. As per my wish they prepared Pomfret, Surmai fry and Surmai rassa. Food was delicious. After Dinner we went for rest in room. Our day ends with tasty sea food. Tomorrow we have to cover some local sightseen along with Beach and Velas village before heading to Dapoli.

Day 2: 1stJune 2013, Kelshi – Velas - Dapoli (Total Distance traveled: 105 km):
We woke up early morning by 7 AM. We decided to go on the beach for swimming.Kelshi has a long, scenic, unexplored beach.Only we were on the beachwith only the sea waves for company and it was like we were on our private beach. We spent around one hour and then returned to our room. We had “Kaju-Upama” in breakfast which was delicious. 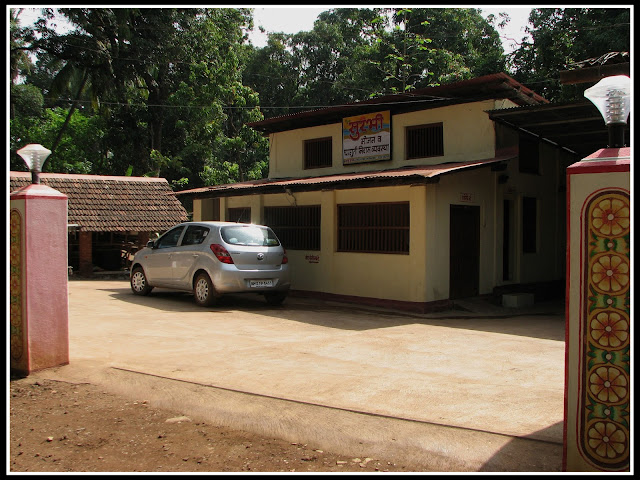 In today’s journey, our first destination was Mahalaxmi Temple. It was built during the Peshwa regime. It also houses the idols of Lord Ganpati and Lord Shiva.The temple lies beneath two huge domes.The famous Yakub Baba dargah is located at a distance of about one kilometer from the Mahalaxmi temple. This was our second destination.

Yakub baba's dargah is a great example of Hindu Muslim unity in India. He had given advice to Shivaji Maharaja during attack on Dabhol. Later on Shivaji Maharaja – The King of Hindu Empire expressed his wish to build a Dargah & awarded land measuring 653 acres. The work on the Dargah of Yakub baba was started by Shivaji Maharaja and later continued by SambhajiRaje but somehow it was never completed. Later Bajirao-I tried to take the work to its fruition. Every year people celebrate Urus on 6th December. The tradition to begin this Urus by Hindu people is practiced even today. From this place, you can see scenic Kelshi beach view and large number of coconut trees.

Next location of Kelshi was Sand hillocks. Naturally formed Sand Hill is at the northern part of Kelshi. As per the historical records and evidences the said Sand Dune is actually a result of Tsunami hit which was formed around the time of Vasco da Gama's visit to India somewhere in 15th century. Local people don’tbelieve on this story. Due to sand hill, construction of Kelshi Bridge(a part of the Coastal Highway) was stopped. This bridge will save around 45 min of journey to Velas but now stopped due to tourist attraction.

After Kelshi sight seen, we left of Bankot fort. Route to reach Bankot fort is not in good shape. After 45 min drive we reached the fort. Parking space for car is not available so better to park vehicle on T-junction road close to Fort. Bankot creek was a major sea trade route; hence fort was an important as a watch tower for trade route. References of this fort is found in Greek traveller Pliny’s works in first century AD, where he refers to this fort as Mandargiri or Mandgor.In 1548, Portuguese won this fort from Adilshah. Later KanhojiAngre captured this fort. In 1818, Commander James captured the fort and named it as Fort Victoria.
Main entrance of this small fort is intact. You can see water tanks, Basement room and bastion on fort. Fort is too small that it takes hardly 15-20 min to see entire fort. From here we can have a glimpse of Savitri River and the surrounding region. Bankot fort has an interesting connection with Sir Arthur Mallet of the Arthur seat point fame at Mahabaleshwar.  He lost his wife and 32 days old daughter in a tragic ferry mishap at the creek.

We took our lunch at Velas which is 3 km ahead of Bankot fort. Velas is enclosed by mountains on three sides and open to the sea on the fourth. It is famous due to Turtle Festival. Velas is also one of the popular breeding sites of Olive Ridley, which is an endangered species of turtle. Season to visit Velas for Turtle Festival is from January till March. We had lunch at Nijsure and then got to know that this family plays important role to conduct Turtle Festival and to take care of environment for turtles. We got lot of information from them and we promised him to visit Velas again to help them for turtle festival rather than visiting as tourist during Turtle Festival.

By 4 pm, we started with our return journey to Dapoli. We took small break between Anjarle and Harne for Sunset. There is a point from where you can see entire village name Pajpandhari which is located very close to sea. Typically Konkani village located very close to sea, Suvarnadurg fort and Anjarle beach on right side – it gives you breathtaking view. This is our favorite point on this route. After sunset we reach Dapoli by 8 pm at relatives place.

Day 3: 2ndJune 2013, Dapoli – Pune via Thamhini ghat (Total Distance traveled: 224 km):
We attended a family function in morning and left Dapoli after having a lunch. We left Dapoli by around 4.30 pm. This time we decided to come via Thamhini ghat. Weather became cloudy and heavy rainfall welcomed us in Thamhini ghat. This was our first encounter with rain after hot summer. Rainfall made our driving more pleasant. We reach home safely by 9.30 pm.
Contact numbers for your reference: